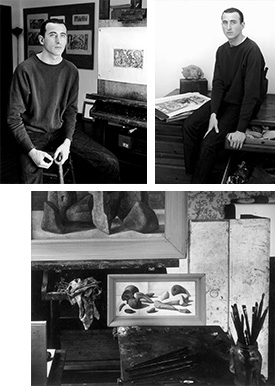 Brice received a medical discharge from the Army due to asthma, and Brice and his wife returned to Los Angeles. They moved into Fanny’s pool house, where they lived for seven years, in order to give Brice the opportunity to pursue painting.

Brice paintings were included in two important national group exhibitions. In The 8th Annual Exhibition of Artists of Los Angeles and Vicinity at the Los Angeles County Museum, he won second prize for painting. The show received press coverage in the Los Angeles Times and Los Angeles Herald-Express, although it was a controversial exhibition to the public. In October, Brice’s submission was accepted to the annual exhibition, Painting in the United States, 1947, at Carnegie Institute in Pittsburgh, Pennsylvania. Initiated in 1943, this annual exhibition was the predecessor of the prestigious Carnegie International.