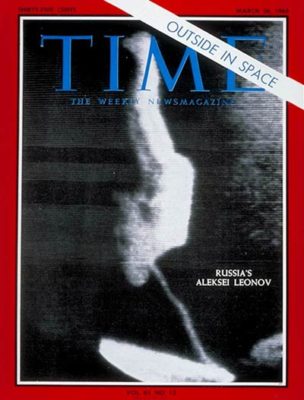 In an age of instant Telstar TV images and photojournalism, the role of portraiture, once a mainstay of the painter’s profession, often seems to have fallen by the wayside. But when Parliament decided to honor Winston Churchill on his 80th birthday, it instinctively turned to one of England’s finest artists, Graham Sutherland. Churchill loathed the result, kept the oil hidden away. Still, when Churchill died, the public turned to Sutherland’s image, saw in its pugnacious, bulldog mien the true essence of their wartime leader.

One of man’s greatest challenges is facing himself; in today’s portraiture the encounter has become stranger and stranger. Freed from the chore of sticking slavishly to the surface likeness, the artist today is free to probe more than skin-deep. The result often produces a psychological study in depth that eludes even the roving camera’s eye. Or, in the instance of Raphael Soyer’s Homage to Thomas Eakins (opposite), it can bring to life a whole galaxy of familiar figures, bound together by the unifying vision of one man who knew and admired them all.

Biographer as Surgeon. Soyer’s group portrait is essentially a salute to the past, an evocation of his fellow realists and their combined debt to Eakins as the greatest painter in the American realist tradition. Soyer unabashedly searched the past for precedent, modeled his composition on Fantin-Latour’s 1864 Homage to Delacroix. He prepared himself by making separate portraits of each figure from life, except for the late Reginald Marsh, whom Soyer had painted 24 years earlier; he simply copied the old portrait into the final 6-ft. 8-in. by 7-ft. 4-in. canvas.

The only non-artist in the final painting is Lloyd Goodrich, director of Manhattan’s Whitney Museum of American Art, who was included for his definitive biography of Eakins. He stands behind a table, paralleling the posture of the surgeon in Eakins’ The Gross Clinic, over his shoulder. “To relieve the grimness,” Soyer posed his only daughter bringing in a tray of drinks.

While working on the Homage, Soyer was constantly worried that he might fail. He jotted in his progress notes: “Will I be able to capture the tremor in the temples of Jack Levine’s portrait, the anxious face of Moses [Soyer’s twin brother], or the aura of aloneness about Edward Hopper?” In the end, he largely succeeded, but says Soyer: “The secret of doing big group paintings has been lost. Portraits painted today are fragmentary, personal, capricious, nervous, tentative, incomplete, accidental, at times full of inaccuracies. But they are fascinating—revealing of the artist more than of the subject he paints.”

Artist as Analyst. A spate of recent shows has established that contemporary portraits are two-way mirrors. Larry Rivers makes a collage portrait of Pop Artist Jim Dine on a metal storm window. Raise the bottom half, lower the top pane, and presto, a different Dine peers through. Pop Artist Andy Warhol tries to beat the penny-arcade snapshot by silk-screening the image many times over. Reginald Pollack found he had painted himself into a corner; his Self-Portrait (opposite page) shows his face surrounded by images of the girl he was then courting. She outnumbers him 6 to 1, and she got the message; when the portrait was done, she married Pollack.

Many of today’s artists prefer to call their unlikely likenesses “interpretations” rather than portraits. Abstractionist Hugo Weber became friends with Mies van der Rohe while they both were teaching at the Illinois Institute of Technology. Not until 15 years later did Mies permit a portrait, and then Weber had to sketch while the architect worked at his desk. The blue of Mies’s habitual business suit pervades a shoulder-swaying pose as slashing as icy spindrift. Weber still does not know if his subject was pleased, but Mies did buy one of his oils and three drawings.

California Figurative Painter William Brice’s portrait of Art Dealer Frank Perls is not, says the artist, “a portrait in the sense that it is a report of the architecture of a head. What really counts in a portrait is what would be of interest to persons other than the subject or his family.” Brice is not sure that he really captured Perls. But his subject is sure. “Wow!” says Perls. “He sees me stuffing myself and drinking myself into a monster-dreamer state in order to fulfill dreams of happiness. I probably saved $5,000 worth of analysis by looking at this portrait.” 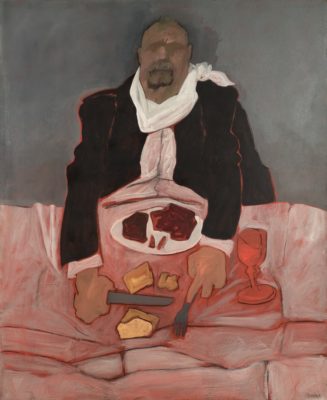 
From TIME, March 26 © 1965 Time Inc. Used under license. TIME and Time Inc. are not affiliated with, and do not endorse products or services of, Licensee.