Our driver asked that we visit his home, and that was a great treat for us. He introduced us to his (mother or mother-in-law) and to his beautiful wife. He was extremely proud of his infant son who reminded me of the infants of Byzantine painting. He had the lustrous dark eyes and the curly dark hair, and larger-than-life quality. He kept our attention focused and dominated the room. His sister, on the other hand, displayed those qualities of gentleness, seriousness and restraint I have seen in Greek women. The Greek woman (in country life) seems to have a demanding life. She works exceedingly hard and cares for the children and the home. She does not show the exuberance, agitation and outgoing energy that I have come to associate with the Greek man. Sexual differentiation seems far more pronounced here than at home.

Our driver insisted we visit the home of a professor who spends his summers in Kastro. It was a small house, filled with antiques and allowing for the fact that all was put away or covered in his absence. There was a persistence of severity and of a sense of past time capsulated. I did not find the place inviting, although I was grateful that we had seen it.

The ride back to Kastro was dramatic. Steep ravines and gorges, all more or less densely populated with the hardy olive tree, were carefully terraced. This land exists in a relation of continuing tension. It has not entirely succumbed to man’s influence and at every moment overtly threatens to return to its original state, wiping from its face the very presence of man. Apart from the evidence of the magnificent excavations, nowhere else have I felt so strongly our ephemeral existence, that we are of the earth and that history lies underfoot. I could more readily understand as well that instinct which determined that the Greek gods be conceived in man’s image and thereby make the heavens and the seas their domain as well. It is extraordinary that in an environment of such raw and elemental nature, man’s presence is pervasive.

In the afternoon, we went to Serifos. We gave two Americans, Dan and Maureen, who were hitchhiking, a lift from Sefanos to Serifos. Dan is a medical student from Chicago and Maureen is a nurse. They were charming and we were all pleased that they could join us for these hours of our travel. They told us all about their experiences and we had a glimpse of another way to see Greece. They were delighted that they could come with us and were happy to have a hot shower and a sampling of cruising on the Daphni. Dan displayed remarkable persistence and balance in his attempts to ski on one ski. We were all amused for at every moment he remained upright when others less persistent or adroit would certainly have fallen. Costa went ashore and arranged a room for them. They were undecided whether they would stay a few days at Serifos or go the next day to Los. We exchanged addresses in hopes that in the future we would meet again.

Calm Sea by Night, by Brice 40

Hydra looks prosperous, clearly affected by tourist attraction but unlike Mykanos not overly massed by it. We strolled slowly along the quay, which is lined with shops. A number of these have more than the expected tourist collections. John and I purchased some shirts. At noon, we left the harbor of Hydra just as two large tour boats were entering it. Captain Andreas took the Daphni to a cove nearby, so that we might swim and

have lunch. The water was a cool deep blue and a nearby strip of beach sparkled in the sunlight. A narrow strip of light fine sand stretched out in front of low rolling dappled dunes. Our lunch, which this day was served on the large table on the off deck under a canopy, had the additional attraction of a number of uninvited bees. It made us a bit uneasy at first but soon all of us were able to ignore them and enjoy the luncheon.

At 4:30 pm., we were underway for Spetses, which is primarily a summer resort. It is a fairly large place. We could tell directly that Spetses is not a popular “tourist” island. To the contrary, it seemed essentially reserved for Greeks who spend their summer holidays there. Commodious houses are built along the short and over the easy rolling hills that spread back from the coastline. No shops with tourist trinkets thrived. We took a long walk around the populated area of the island – first along the coast and, on returning, through the center of the town. There were tailor shops, shoemakers, grocers and hardware stores – all shops that service the summer residents. The Daphni was anchored in a little harbor at one end of the island and Boy and Sister took a horse and carriage with Linda from the center of the town back to the Daphni. By the time Shirley, Barbara and I, who walked, returned to the little pier across the harbor from the Daphni, we were happy to see Manuel in the launch approaching to take us gently back along the harbor waters in the twilight. 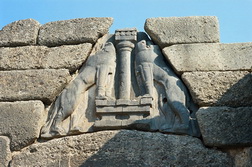 At 12:30 p.m., having passed by the verdant island of Poros, we arrived at Epidaurus. Swimming and water skiing preceded lunch. After lunch, we took two taxis to Mycenae, which is approximately an hour and half drive away from Epidaurus. The terrain was varied. At first, it was mountainous with large boulders jutting out from the rich red earth. Later, we passed through an expanse of plain that was cultivated and was a farming district. We saw many fields of tobacco. Mycenae is a formidable site.

The remains of the massive palace, which sets on a high mound flanked by two steep and barren mountains, are forbidding. The lions, which are carved into the enormous monolith lintel of the entrance, are powerful and fearsome. A dry wind sweeps through the ruins and an air of dark mystery hangs heavy over the entire site. The remains of the construction and the character of the site attest to aggressive power. Mycenae is also formidably

defensive in the manner in which this fortress commands the entire plain.

On returning, we stopped by the acropolis of Tiryns, and the one at Argos could be seen silhouetted against the sky. 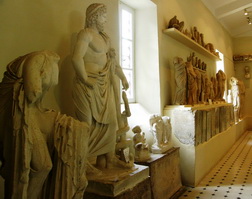 We also visited the theatre at Epidaurus and the small museum there, which has a number of marvelous works from that area.

We returned to the Daphni at 7:15 p.m., swam and then dined. It was our last dinner on board and the chef had made a grand farewell cake, wishing us well and sending love. Sister was served first and she ate “love.” 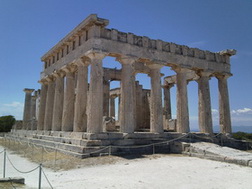 Before going back to the port of Piraeus we stopped at the island of Aegina and visited the temple there, which is in comparatively good repair. I am always impressed with how knowing the choice of site is. Each location is different but all are memorable. The temples dominate and magically grace the landscape of Greece.

At 5:00 p.m., we entered the harbor of Piraeus. Our trip had been excellent and though it was ending, all shared a satisfaction of a full experience. The entire Daphni crew came up on deck to wish us well and say good-bye. We drove to the Grand Bretagne Hotel. We were all a little weary and so were pleased to eat in the hotel dining room that evening. The Grand Bretagne is a more pleasant atmosphere than the Hilton was.