At 10:30 a.m., Boy and Sister, Barbara and Shirley and I went to the Archeological Museum of Athens. All the young people had elected to sleep late that morning. This museum, having national representation, has works from all periods and localities. I found archaic and early works the most moving – I realized that the containment of a vital energy was a most appealing aspect of their assertion and presence. In contrast, the grace and “perfection” of the later works seem to me less vibrant, less full of life. Their ideal of a perfected form rivaling nature (ever closer to her) and their infinite and conclusive grace reduced the aspect of duality, that drama of enactment of transformation, which I am so moved by in the earlier works. The representation of Minoan art was modest in comparison to the museum in Crete. The Cycladic works included a number of pieces I have so often seen reproduced: “prototypes.” The collection is exhausting and I was ready to leave by noon.

I squeezed in a dentist appointment (I had broken a tooth) while all the rest of us lunched at Floca. At around 3:00 p.m. Jerry Russell and John and I went to the Acropolis Museum which although much smaller is equally memorable to the national museum. Here the beautiful Kouroi abound with their marvelous smiles, their delicate draperies and their sensual appeal and animation. Here too there is a containment and resolve of vibrant life. After the Acropolis Museum, I returned with John and Jerry to the national. It was good to see all the works again and to have the opportunity to concentrate on those works, which were the most impressive to me. I took a number of photos but was disappointed that the many fragmentary works from Epidaurus were not to be photographed. Fatigued and brimful of sensations, responses [and] images, we returned to the Grand Bretagne, had cool drinks, and discussed our reactions. That evening the Russells dined with friends and we (Barbara, Adam, John, Shirley) dined at Floca. The food was excellent. We returned to the hotel and retired after having had a drink with the Russell group who had also returned.

Shirley, Barbara, Adam and I left the hotel at 8:00 a.m. for a day trip to Delphi. John had decided not to join us as he and Jerry had decided to go swimming at a beach near Athens.

Dimitrious, our driver, was in every sense a professional: he knew about the places we passed; he drove the car swiftly and expertly in various kinds of traffic and on different kinds of roads. He would make suggestions on where to start an excursion by foot and where to be picked up, which never reduced what one saw but always made the walking the least fatiguing. The countryside was varied and it changed from verdant plain (often covered with either grape or tobacco) to hard mountain vistas. At the base of these mountains were assorted trees and plants, leafy and all ranging in an endless array of rich greens. Higher up the rich dark pines dotted the rocky slopes. At the peaks, the land became spare, sharp and of a sparkling austerity. 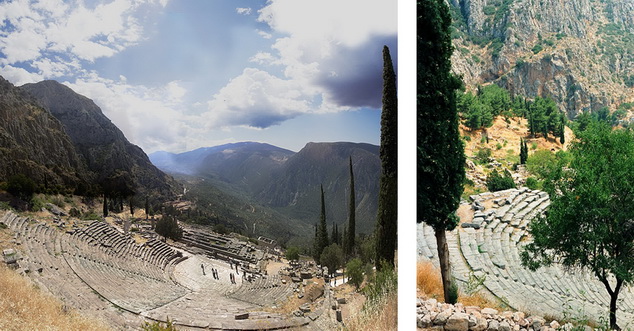 The tholos at the sanctuary of Athena Pronoia, Delphi

Delphi is a superb site. It is complex and has a quality of unfolding itself as if in a procession one came one by one to these surprising discoveries each unique and yet the overall of a tremendous unity. Thanks to Demitrious, we walked down as the sequence unfolded itself. Although I realized that we were seeing all this in the reverse order of its original plan, I could see by the faces of the panting tour groups ascending that their hopes of experiencing Delphi as the ancients might were certainly out of the question. In all these sites, there is an uncanny feeling for location. Whether it is within a protected glen or perched high upon a promontory the edifice is invariably of momentous relationship with its environment.

The museum at Delphi is splendid. A number of incomparable “masterworks” are there. There is no way that I feel I can put down here the sense of that experience although I know it will stay with me. 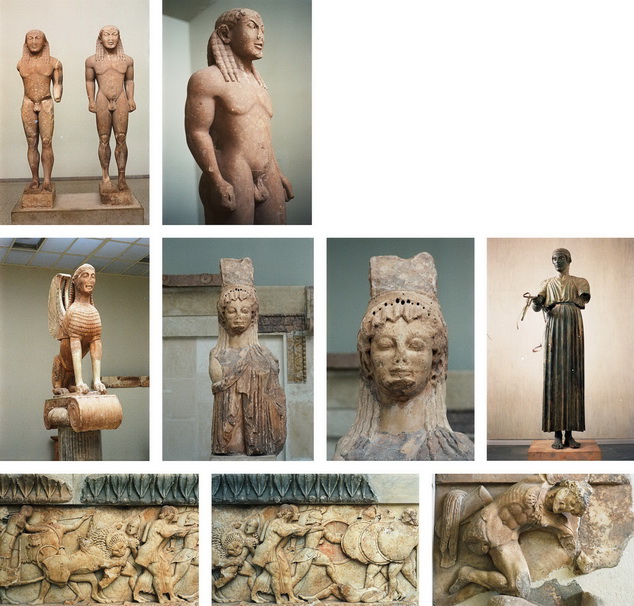 Kleobis and Biton, Kouroi; Biton, Kouros; Sphinx of Naxos; Caryatid; Caryatid bust; Charioteer; Temple of Apollo pediment relief; adjacent relief; Relief of Hercules from the Treasury of the Athenians to Apollo from the Archaeological Museum, Delphi