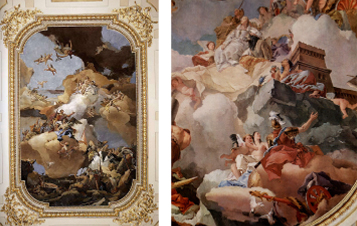 To the palace in the afternoon. Elaborate Rococo rooms and then later grand Gothic tapestries and then to the rogue armory. Tiepolo ceilings in the palace – what excellent decorations, so much better than lesser attempts at the same!

A last Spanish dinner at the “Alcade.” We were beginning to look to being in Athens and of all meeting for our trip through the Greek islands.

Boarded our TWA 707 at the airport at Madrid. We noticed they were working on the landing gear. There seemed to be a great consternation among the mechanics that were picking away at a great wheel hub thread with something that looked like an ice pick—not at all reassuring. After some delay, we were airborne. A thoroughly unattractive man from Chicago sat next to me. He opened his conversation with, “They talk about disruption and protest in Rome but it is nothing like home where a coon will gun you down if you walk in the streets at night.” I closed our conversation right there and then without comment. A truly repulsive person, he personified the ugly American. A stewardess on the plane, a Dutch girl with piercing blue eyes, talked with us. She was very pleasant and talked of her living in European places: of life in Rome, vacations in Mykonos and excursions to Paris, Hong Kong, etc. I left our address with her should she visit Los Angeles. She promised to tell us about Rome should we be there. Prior to landing for a stopover in Rome, a landing gear check was made and all went well. We were in Rome for about ½ hour and then off for Athens. 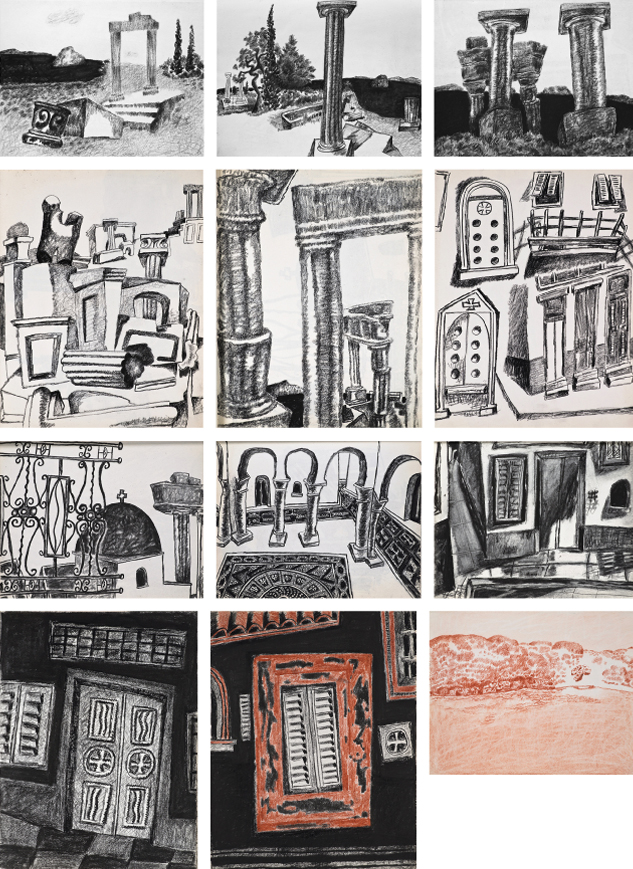 Sketches of Greece from Brice’s journal 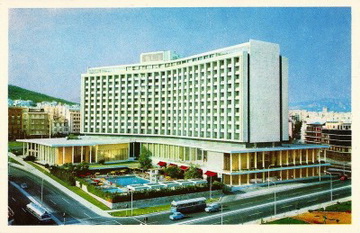 The landing in Athens was bumpy due to a cross current of brisk wind. We were relieved to touch down. It was hot and we were happy to leave the airport and arrive at the Athens Hilton. It is a typical Hilton hotel. Barbara and Adam [Poe] had arrived before us. Boy [Mr. Charles Russell], Linda and Jerry [Russell children] came up to our room. An hour after we arrived, Sister [Mrs. Alice Russell] and Shirley joined us in the Pan Bar of the Hilton at 8:30—a gay reunion with all the talk of the intervening time.

Dinner in the hotel restaurant: fairly good Greek food. Drinks for all but me on the Hilton roof with a beautiful view of the Acropolis of Athens. At around 2:00 a.m. we retired, looking to our visit to the Acropolis on the following day.