At about 3:00 p.m. we arrived at the much publicized Mykanos. We tramped through the diverse shops for about four hours and purchased a bedspread that we sent home. We all had a negative reaction to Mykanos. If it had once had charm, little remained in the completely commercialized tourist character now pervasive. We were pleased when Capt. Andreas determined not to spend the night in Mykanos harbor. He took the Daphni to an isolated cove nearby and we all slept peaceably.

We were to start for Patmos at 2:30 a.m. and it was pleasant in half sleep to feel us get underway. Soon after, we were rolling to heavy swells. By 6:30 a.m., we were pitching and rolling enough to move anything on board that was not fastened down.

We arrived at Patmos, a verdant, terraced fishing village. It is known for its monastery where John the Divine supposedly wrote the apocalypse. The monastery commands the summit of the island and stands formidable. Due to the need to see a doctor at Patmos about John’s eye irritation and Linda’s skin irritation, I missed the entire interior of the monastery. I did however enjoy the mosaic courtyard, painted frescoes and room where the monks take their meals. The monastery is sharply contrasted to the foreboding battlements that surround it. It is all pure white, marvelously warm and simple in form and with enormous character—peace here. Time is still.

At around 1:00 p.m. we returned to the Daphni and enjoyed a delicious moussaka and mixed salad for lunch. Then followed a siesta. I awakened to the easy roll of the Daphni to gentle swells.

At about 6:00 p.m. we put in to swim at a beautiful bay and although the wind was up the water was absolutely clear. The wind swept a shimmering passage over the face of the bay glinting a fleeting sheen wherever it danced.

After our swim, Capt. Andreas took the Daphni to a marvelous little inlet off the island of Leipsoi. The small harbor was flanked by pure white small Byzantine churches of brilliant blue domes and simplest form. A satisfying proportion united throughout.

In the twilight of the fragrant evening, Manuel drove the little launch of the Daphni to the pier, which jutted from the quay.

As we disembarked, we strolled past a pleasant taverna. Small groups of townspeople were seated at little tables on brightly colored chairs and gaily talking. Bands of small children scampered and swarmed around us. Everywhere were smiling faces, clear eyes and welcoming. Without reservation, they gazed meeting face to face and did not turn their look away. In the luminous atmosphere of the soft azure sky all colors, surfaces and forms were mysteriously transformed. Here and there little lights in the houses shined star bright and the town glowed in the echoes of the reflections of its pure white walls, its intense blue domes and multicolored decorations of window frames shutters, doors and doorways. The forms of these houses are satisfying in their simplicity. They express in their weightfullness of proportion and material a most appropriate relation to the earth and their surfaces; walls, roofs and domes absorb and reflect the evanescent light of the changing day and evening.

Gradually in the enchanted twilight, contours receded and only subtle dazzling patches of surfaces remained vibrant in the infinite variation of color orchestration. The moon, brilliant and full, almost golden, rose rapidly over a distant hill and the day met the night in harmony of coexistence and altered all sense of time and place. Even the sky changed its form. It turned itself and expanded, and, as if to dramatize its newfound dimension, placed its stars in such a way as to make the eye discover and experience its grandeur. The horizon near and far was aglow separating itself gently from the dark expanse that was sea. Forms of persons hovered, silhouetted in the dimming light as we looked back from the launch returning to the anchored Daphni. We saw Capt. Andreas at the taverna, sitting quietly and alone. Each of us was moved to wonder at the beauty of this land, this sea, this light.

Later there followed an excellent Daphni dinner and much animated discussion concerning happenings at home. A sharp contrast to the idyllic day we had spent. I listened disquieted by the now familiar recounting of the crisis of our country and the formidable scope of its problems. For the moment, it all seemed distant in the harbor of the miraculous night of Lipsos.

Up at 7:30 a.m., bright and clear with a gusty wind and frothing white caps on a blue black sea. Breakfast of fresh fruit, toast and honey, and coffee.

We arrived in the ample bay of Karystos, a large harbor surrounded by hills. It was Sunday and Captain Andreas said an hour would be sufficient for walking around in town. At first, it appeared that little here would be of interest, but as we walked further from the business center, we came upon streets of houses riotous in color. Everything was painted; even the sidewalks were sloshed in casually applied splashing of color and all playing bright against the white surfaces of the walls and the marvelous cerulean sky.

After returning to the Daphni, we moved to a small inlet protected from the mounting gusts of wind and ideal for our swimming. Lunch and siesta followed.

We arrived at Kos at about 3:30 p.m. It seemed larger and more “genuine” than Mykanos, less corrupted by tourist visitation. We visited embattlements that were part of a fortress built by the Knights of Rhodes and later built up again by the Venetians. The Turkish influence is more apparent here, with a number of minarets and mosques breaking the horizon. In the late afternoon, we visited the site of Hippocrates dwelling, an ancient place of learning…a beautiful view showed itself from all sides and the generous proportions of the footings spoke of a somewhat public place. A series of columns, at once a delicate counterpoint to the massive steps of the main formations, stood gracefully and I could see the entire harbor of Kos in the spaces between the pillars.

After the delicious Daphni dinner, we strolled about Kos and then returned contented and fatigued, quite ready to retire. 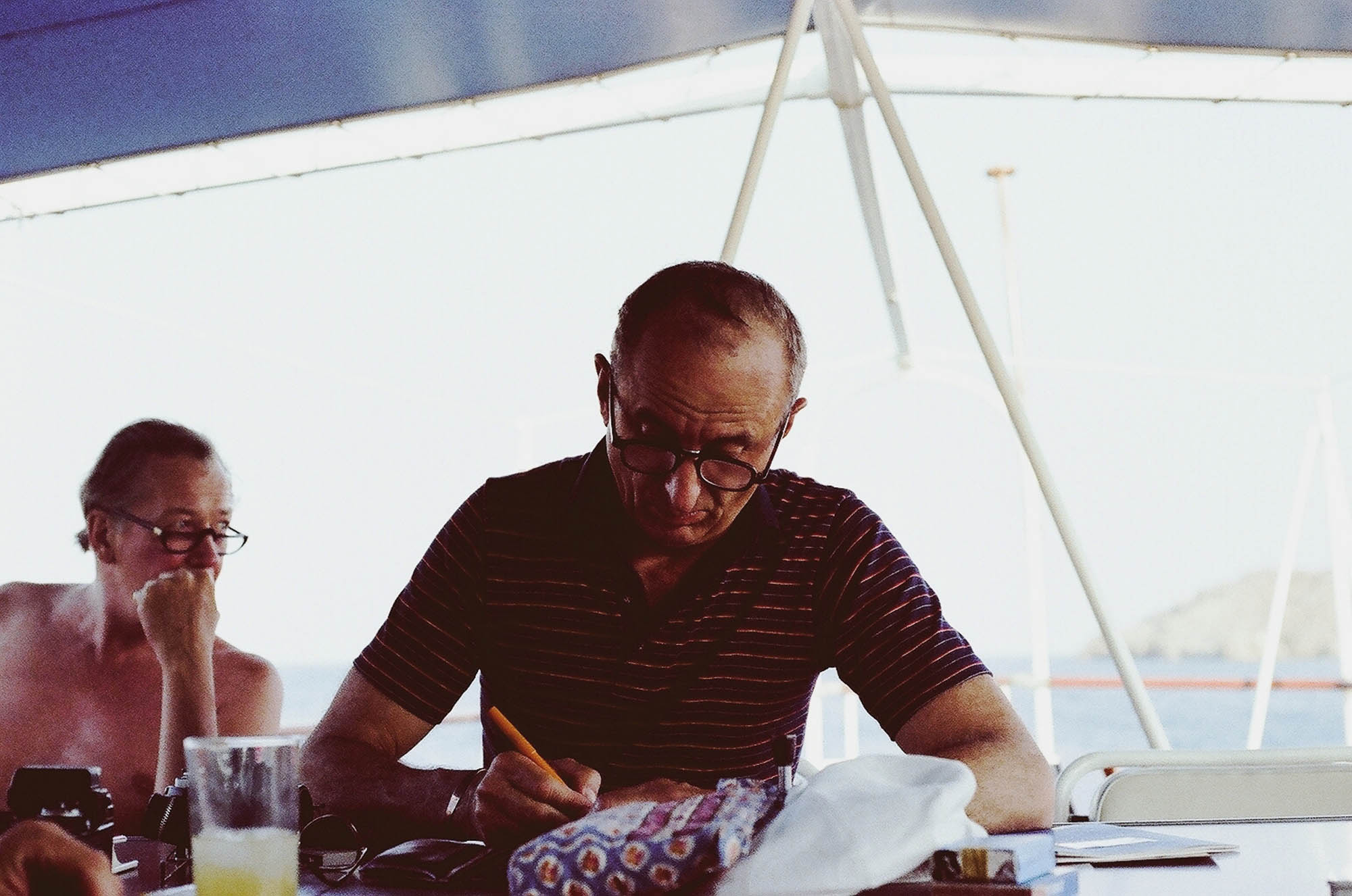 We started at 7:00 a.m. I awakened as we were underway, but fell back to sleep. Breakfast at 10:00 a.m. and after I started a drawing, but the Daphni was rolling too much for me to continue.