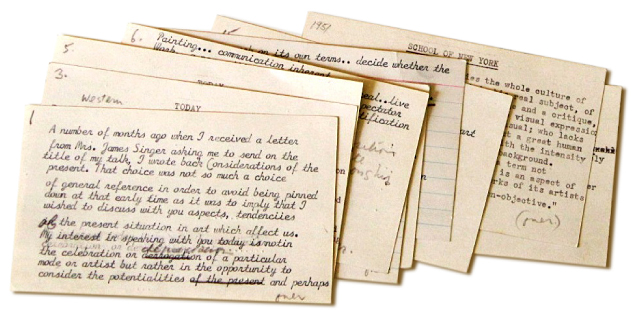 NOTE: William Brice wrote the notes above to himself, on 3×5 cards, for a lecture at the St. Louis Museum of Art that he had been invited to give in 1964 regarding the then current state of Art.

A number of months ago when I received a letter from Mrs. Singer asking me to send on the title of my talk, I wrote back Considerations of the Present.  That choice was not so much a choice of general reference in order to avoid being pinned down at that early time as it was to imply that I wished to discuss with you aspects, tendencies of the present situation in art that affect us.  My interest in speaking with you today is not in the celebration or depreciation of a particular mode or artist, but rather in the opportunity to consider the potentialities and even the dangers of the present.  That is to say…even to speculate concerning some of the conditions which affect us, artist and spectator alike.  We all know that the interest in and the consumption of art in this country is in the ascendency.  The American artist enjoys an ever-increasing response of recognition and support.  Yet, some of the most successful express an anxiety, appear to be as self indulgent as a prima donna, if in the earlier part of this century the artist complained, “You don’t love me”…and over the years you have come to say, “But we do, we love you”…now, he says, yes, but not in the right way.

TODAY
Today, Western painting no longer necessarily includes the service of a specific religious dogma, does not present images containing the shared symbols of a tradition directed society, has been relieved of its repetorial role through the advent of other visual media.  The burden of responsibility upon the individual is increased as is the possibility of fulfillment of his potential.  But the situation is demanding.  The emphasis of our society upon material and technological achievement, the rapid changing and revising of ethical and moral codes, of philosophical and scientific attitudes denies the stability allowed by the adamant dictums of the past and presses us into a liberated but seemingly chaotic existence.  The sustained power of a movement or an idea is so short-lived that evaluation becomes increasingly difficult.  The rate of consumption increases, the number of potential consumers multiplies and much is discarded, replaced before it is used or even understood.  Novelty becomes of itself a prime value.  The amount of available material, information accessible is overwhelming.  It is only in the light of its variety, its inclusion of simultaneous and divergent attitudes that we can see the wonder of it. The chance for categorical judgment is reduced, the intense specialization, which permits perhaps the most meager interests and efforts, cannot be written off without consideration of their place in the total picture.

“Without the fear of tolerance of the non-committal [unintelligible] we can see that richness of our legacy is based historically on our capacity to see that art is not exclusive, rather our appreciation is increased to the degree that we are inclusive…the many worlds of art.”

• Valued entirely for the end product

• Valued for the process in which he is engaged

1.   People need help in the process of developing significant values

2.   The artist must search for himself in them—unity/chaos

4.   People will value art products only after they value artists

5.   Artist engaged in a crucial exploration of a basic truth…brings to awareness the forms by which experience is integrated and developed.

“…I believe that man will not merely endure: he will prevail. He is immortal, not because he alone among creatures has an inexhaustible voice, but because he has a soul, a spirit capable of compassion and sacrifice and endurance. The poet’s, the writer’s, duty is to write about these things. It is his privilege to help man endure by lifting his heart, by reminding him of the courage and honor and hope and pride and compassion and pity and sacrifice which have been the glory of his past. The poet’s voice need not merely be the record of man, it can be one of the props, the pillars to help him endure and prevail.”

Evil…give to some things bigger

Awareness of self…differentiation
The nature of artistic uniqueness

Not to be different, but to be.

Not for novelty
The wonderment of experiential out of relevance…actuality

Vitality in a work related to a condition of discovery for the artist the heated stamp of the uniqueness of the actuality.

Mozart copying a script spirited variation could not refrain from composition.  Alteration of paintings by artist.