Harry, so long now dear to me, when I was fourteen opened to me a view of passionate engagement in the practice of art. Tough minded and discerning he was enthusiastically appreciative, capable of being deeply moved by the wonder of it—art. He was totally absorbed in it and conveyed to me through his gentle teachings and infinite patience and through his own creative process a value in life commitment. In his subtle and resolute persistence and his integrity of conviction and sensibility, he was confident of his own powers as an artist but remained ceaselessly open and questioning, never complacent and never arrogant. Even in the late years of his life, he retained an adventurous excitement and youthful vibrancy, an encompassing generosity. Harry did not know how dear he is to me and nor did Rhoda. I say it now to share with you Antoinette and Glenn, and with those he loved and those who loved him, the gratitude for all that in the sharing of his life with us he illuminated. To the degree that we actually do live within one another there is experienced an immortality. 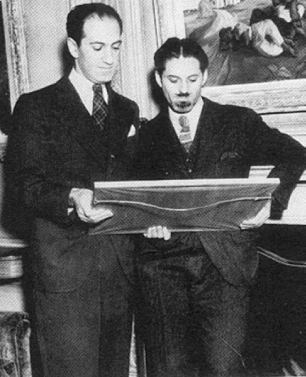 NOTE: At age thirteen in 1934, Brice expressed his desire to study art to his mother, and so she introduced him to Henry Botkin, a well regarded, New York artist and a first cousin to George and Ira Gershwin (For more about Botkin, please see “Links/William Brice/Education/Botkin, Henry–Art Mentor to William Brice”). Thus began one of Brice’s seminal relationships. Besides drawing and painting under Botkin, Brice and his mentor frequented New York galleries and museums, and with his savings, Brice purchased his first painting: a 1906 Picasso gouache. In 1939, after Brice and his mother had moved to Beverly Hills, Brice returned to New York to study at the Arts Students League and to live with Mr. Botkin and his family for a year.

Brice’s words seem to swell beyond just praise for Botkin as an artist and suggest a reverence for Botkin as a man—one who could not be more opposite to the man that his father was. The qualities Brice ascribes to Botkin are precisely those that Brice’s own students attribute to him.