I am applying for a sabbatical leave for the Fall semester period, July 1, 1958, to January 31, 1959. My sabbatical project is one of study and of creative production to be undertaken in France and Italy.

During the past nine years I have, in my own work, been interested in painting scaled to be an architectural ambient. In 1944, I executed a mural work in Ensenada, Baja California, and became aware of the exciting possibilities of painting related to architecture. The proposition of interrelationship of image and structure is extremely challenging. In 1953, I traveled in Mexico and had the opportunity of studying at first hand the mural works of three major artists of the twentieth century in Mexico: Joseacute: Clemente Orozco, Diego Rivera and Miguel Siguieros. At that time I realized that the study as well as the performance or architectural painting demands consideration of the entire structure and its environment. Intimate knowledge of the total requirements and the resolution of same necessitates firsthand experience of the actuality. In 1954 Arts and Architecture magazine published an article which I had written entitled “Concerning Art and Architecture.” In 1955, I exhibited a series of wall panels at the Alan Gallery in New York City and at the Frank Perls Gallery in Beverly Hills, California. Subsequently works of this series were awarded prizes in competitive exhibitions. The Los Angeles County Museum and the Santa Barbara Museum of Art purchased works of this mural scale series for their permanent collections. In the Fall semester of 1957 a graduate course, Art 276, “Visual Arts in Architecture” was added to the offerings of the Drawing and Painting area of the Department of Art, UCLA. In teaching this course, the value of my past studies in Mexico in establishing a background for instruction became increasingly apparent. The severe limitation imposed upon this specialization by information gained through reference to slides and reproduction of works was clearly revealed to me.

In the light of the foregoing, I propose a study of Romanesque and Renaissance Wall Painting in France and Italy as my sabbatical study project. As a practicing artist and instructor of drawing and painting, my primary concerns are related to actual performance of such work involving consideration of technique, structural relationship and concept. The following is my plan of places of study; the authorities with whom the project will be conducted are the artists who produced these works.

TAVANT – CRYPT OF THE CHURCH 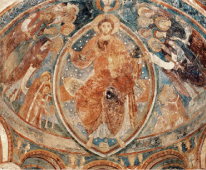 MONTOIRE – CHAPEL OF THE PRIORY OF SAINT-GILLES 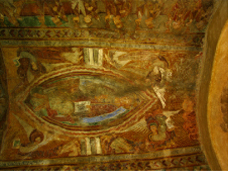 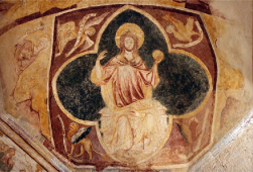 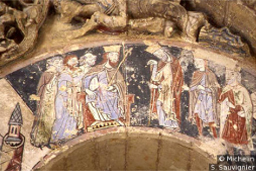 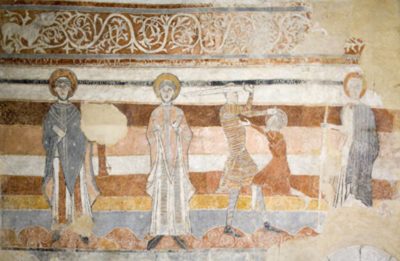