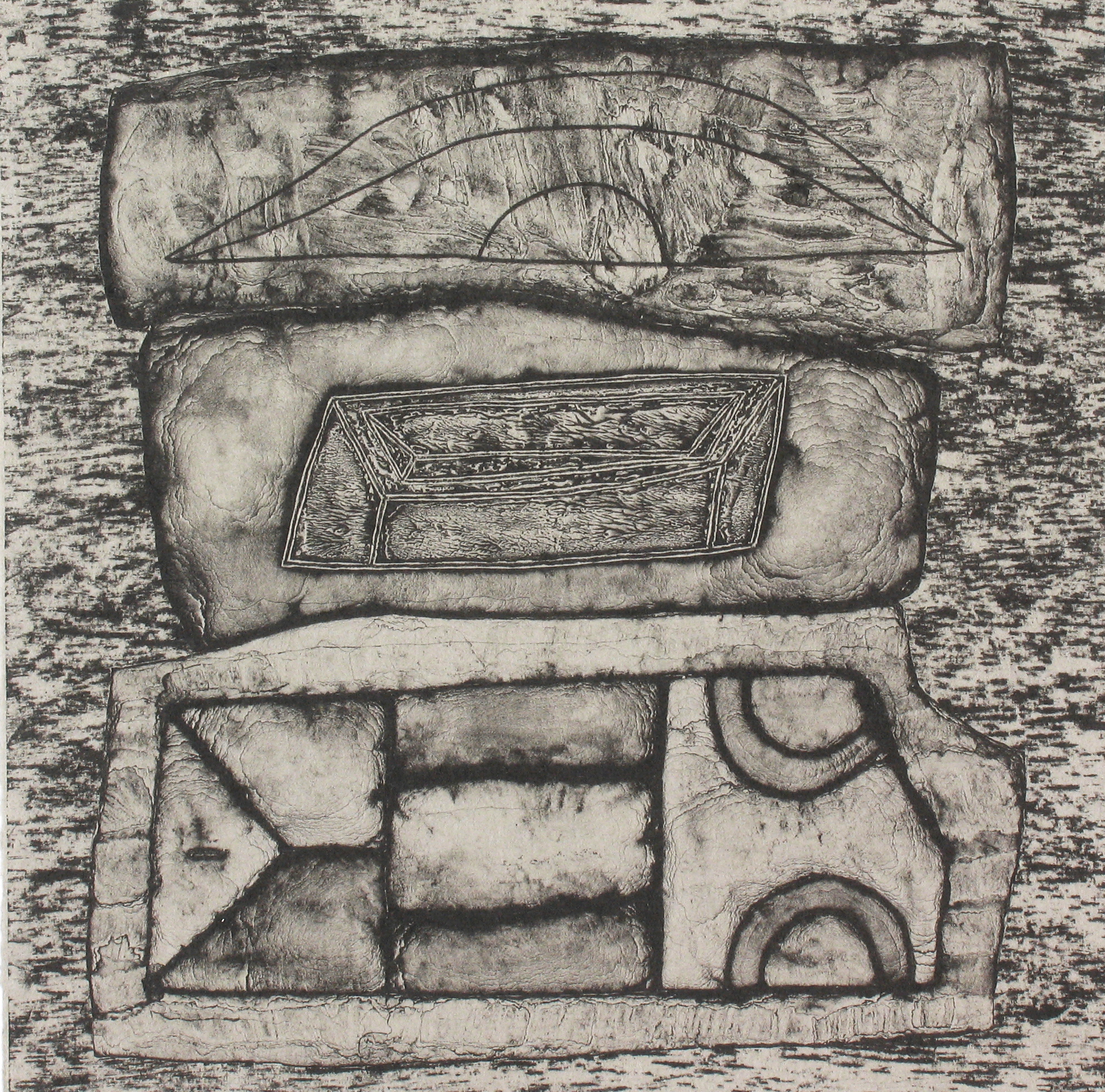 Although William Brice is best known as a painter, he has long been fascinated by the graphic arts and has become a knowledgeable and versatile printmaker. Brice always seems to have sought in printmaking unique imagery and visual effects that are not available in other media. In working with a new printmaking process, he seeks to become so familiar with the medium that he begins to think in its terms, as one might think or dream in a foreign language. And just as someone learning another language finds that subtle and myriad influences creep into the use of the native tongue, Brice’s printmaking experiences have enriched his drawing and painting.

Intelligent, well read, and articulate, Brice is friendly and gregarious but works solitarily, and this introspective aspect of his personality is evident in his work. His is an art of evocation and association, and he expects viewers to respond personally, drawing on their own experiences. We may wonder about his ideas and intentions and try to decipher his symbols, but the artist hopes that we will instead take possession of the work of art by looking carefully and enjoying the experience of our own associations and the contemplation they spark. 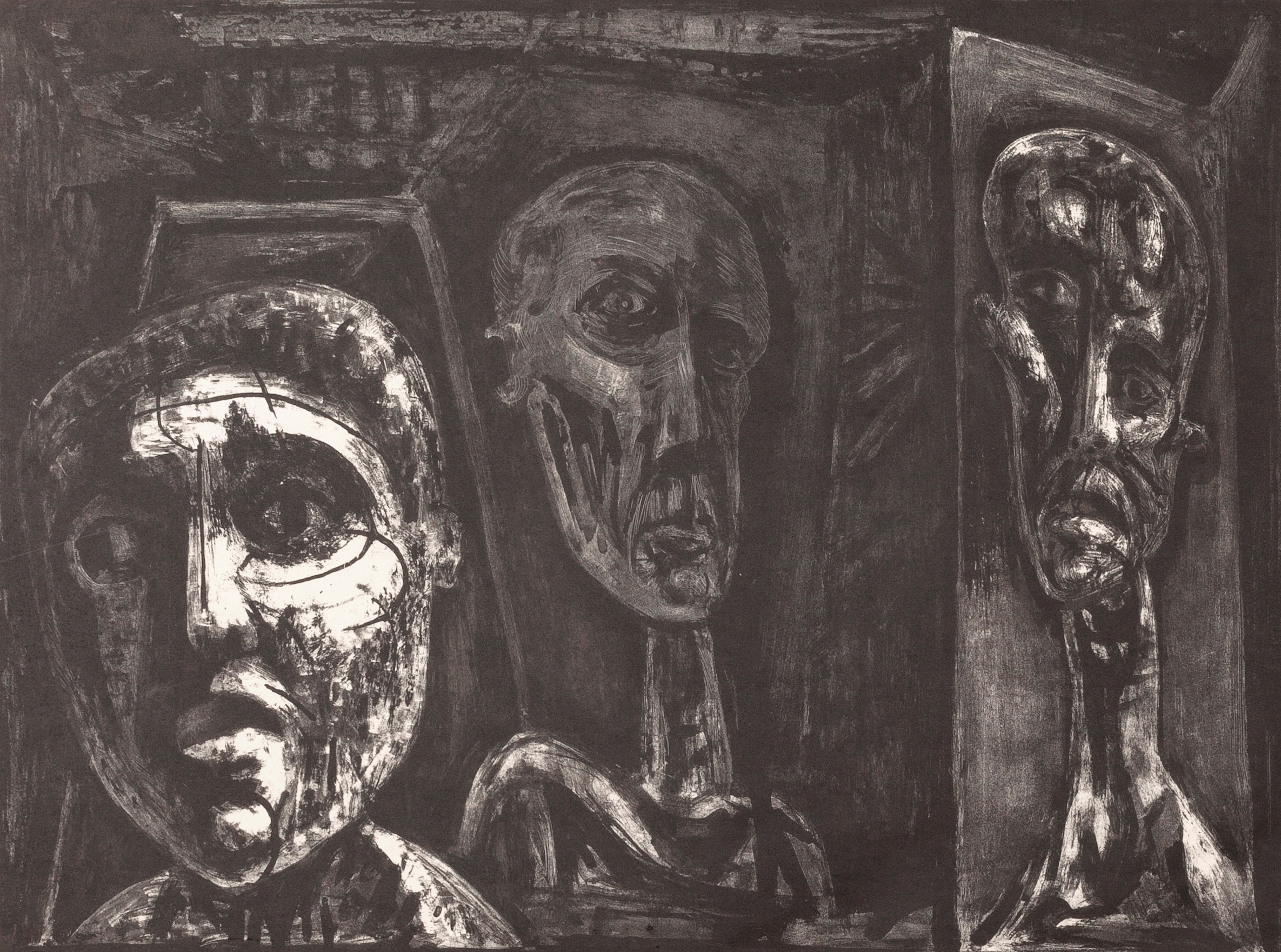 Brice made his first print in 1951 (see fig. 5) in collaboration with Lynton R. Kistler, the only master printer in Los Angeles at the time who specialized in artist’s lithographs. This provocative, mesmeric image gave form to melancholy themes of alienation and loneliness. Bold, Rouault-like outlines pull the figures away from an abstract, faceted background, creating a sense of tension or even crisis. The printer etched the stone and chemically prepared its surface, on which Brice drew with waxy crayons and liquid lithographic tusche, afterward skillfully executing details and highlights by scraping ink away from the printing surface. Kistler then undertook all of the printing on his own and presented the artist with the finished edition of his precisely drafted, haunting print. Despite the success of this lithograph, it was only a diversion for Brice. At this time printmaking was still uncommon in California; there were only a handful of artists dedicated to the medium, few opportunities for exhibition, and practically no market for graphic arts. Indeed most serious West Coast painters disdained printmaking as mere craft. Although Brice was well aware of the flourishing production of and market for prints in the East, he turned his attention away from printmaking for several years. 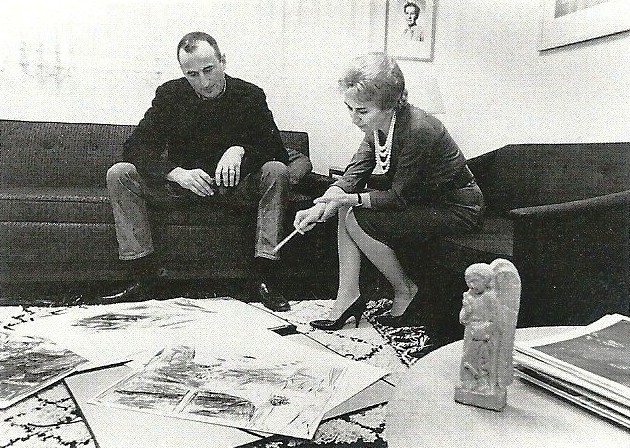 In the late 1950s Brice became intrigued with the process-oriented activity of etching and its relationship to drawing. He learned the fundamentals of the intaglio processes from his colleague John Paul Jones, who taught printmaking at the University of California, Los Angeles. Over a period of several months Brice conducted experiments with etching and aquatint, executing four plates and pulling proofs on the presses at the university but never producing editions. These prints represent isolated female figures in a sketchy, expressive manner closely related to Brice’s drawings. Made chiefly to satisfy his own curiosity, they provided a comfortable introduction to intaglio and rekindled his interest in printmaking in general.

So the artist was pleased when late in 1961 he was awarded a Ford Foundation grant to work at the recently established Tamarind Lithography Workshop in Los Angeles. Between November 24, 1961, and April 25, 1962, Brice visited the print shop several times a week. He collaborated with several printer-fellows, generally under the supervision of technical director Bohuslav Horak, producing twenty-four prints. This time the artist was deeply involved in every stage of the production of the lithographs (see fig. 6), and like most of the early Tamarind artist-fellows, he applied himself to the task with enthusiasm and some trepidation. His venturesome, sometimes tentative lithographs reflect the quickly evolving abilities of both artist and printers. These prints exemplify Brice’s drawing manner at this stage of his career and the range of styles and subjects that engaged him. The earliest among them represent languorous female figures captured in private moments in domestic interiors. Their familiar glances and unguarded poses imply warm emotional intimacy, sometimes with sensual overtones as well. Oblique walls and window frames break up the confined settings, giving depth to the space. Sketched directly on the stone with a single crayon, these images reveal Brice’s confidence as a draftsman. Their subjects, mood, fluency of line, and such details as patterned fabrics are reminiscent of Henri Matisse’s line-drawing lithographs of dancers and odalisques made during the 1920s.

Ten other lithographs printed at Tamarind in 1962 are studies of female figures whose full proportions and strongly modeled forms imply dimension and physical presence. Although some of these prints are only marginally successful, they nevertheless provide a fascinating map of Brice’s growing understanding of and facility with lithography. Their number may also reflect the workshop’s interest in process and the training of printer-technicians as well as in the production of resolved works of art. 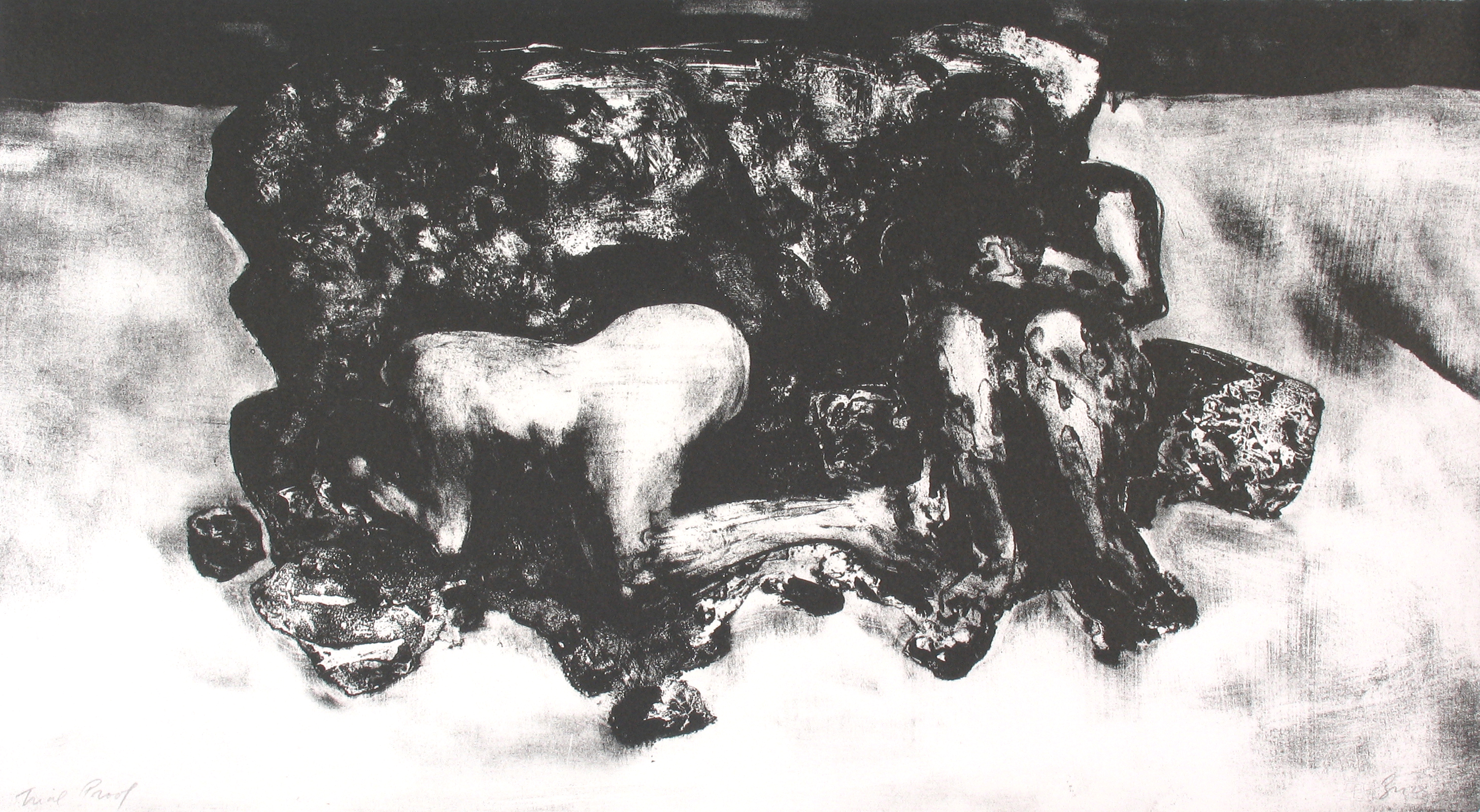 These evocative lithographs depict broad, indistinct views with rocky outcroppings beneath moody, cloud-studded skies. The expressive figures are set in Rodinesque poses that usually obscure their faces and negate personality. These prints are quite similar to the artist’s contemporary oil paintings and charcoal drawings. During this period Brice often sketched from a live model in the studio, and these sketches formed the basis for the figures in his paintings and prints. The landscape settings were derived from regular sketching trips to the peaks and canyons along nearby Mulholland Drive, at that time still a rough country road winding along the crest of hills north of the wide Los Angeles basin. There the artist found inspiration in the dry brushwood chaparral, with its shaggy pines, waxen succulents, and its close spectrum of tawny hues. This microcosmic landscape contrasts with sweeping vistas of desert and distant mountains, of the Pacific Ocean, and of the city, with its grid of roadways studded with buildings. Although they began from direct access to figure and landscape, Brice’s drawings and prints are closely allied to the work of such Bay Area figurative painters as Nathan Oliveira and Richard Diebenkorn, who made accomplished prints of this sort. Their style and mood also reveal the lingering influence of Rico Lebrun, Brice’s friend and a fellow teacher at the Jepson School in Los Angeles.
12345