2 of 5
Brice’s figural landscapes stand apart from his other early Tamarind prints in their depth of expression and evocation of mood. These disconsolate images summon universal feelings of loneliness and isolation, exposing the vast emotional distances that can grow up between people. Their compositions alternate between flat pattern and illusionistic depth, between representation and abstraction, and they are equally engaging on both levels. Another reason for their success is their use of the medium of lithography to create visual effects that could not have been achieved in any other medium. With thick crayon scribbles and a range of washes in brushed lithographic tusche, Brice achieved sensitive interplays of a spectrum of delicately modeled grays and dense, saturated black. Using chemical solvents to dilute, disperse, and mottle ink on the printing surface, he created organic patterns of reticulation, including the distinctive peau de crapau, or “toad skin,” lacery. These elegant effects are pulled from the stone with apparent effortlessness and are clearly the knowing handiwork of master printers. Their technical accomplishment reflects the collaboration of Tamarind Lithography Workshop at its best. 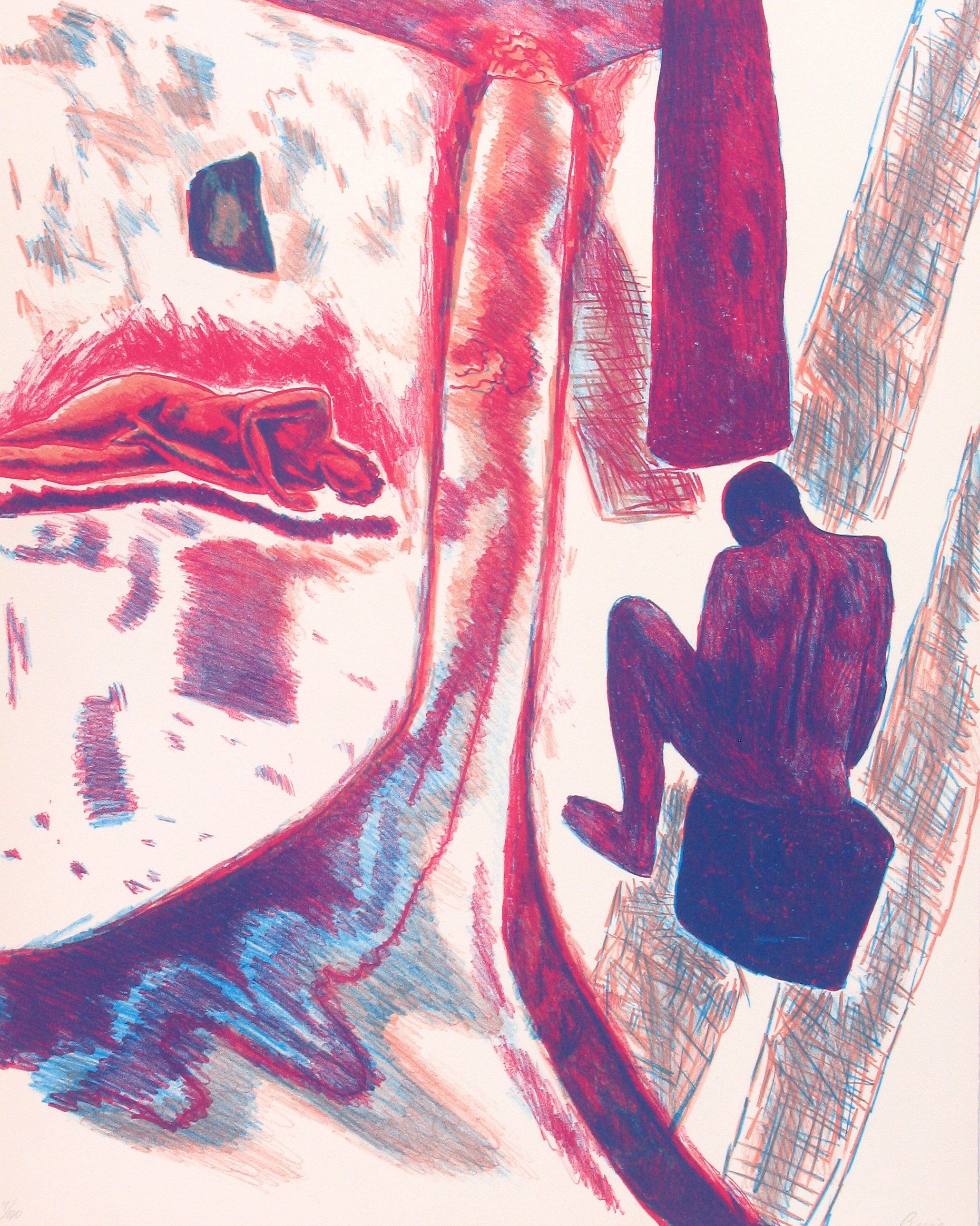 Several of these lithographs, along with Brice’s intaglios and ten figural drawings, formed a solo exhibition at the Frank Perls Gallery in Beverly Hills in the summer of 1962. The later works in this group show how far the artist had come in pushing the figure toward abstraction. The influences of Matisse and Picasso are apparent, especially in the more abstract works, in which the figure is reduced to faceted, boulderlike shapes, often bent into impossible contortions. Displaying an impressive array of linear and tonal effects, the works included in this exhibition achieved a wide range of mood. Considered as a group, they reveal Brice’s goals and capabilities as a draftsman.

Brice made his next group of prints four years later, in 1966, when he returned briefly to Tamarind as a visiting artist. By this time his primary focus had shifted to large, brightly hued canvases. Most depict ambiguous garden landscapes, upended and transected by meandering streams and by tall, columnar tree trunks and their rectilinear shadows. These settings are peopled by mysterious figures, boldly outlined and provocatively posed. The artist used arbitrary, fauvist colors, energetically applied to the canvas. In their involvement with figure and landscape, Brice’s paintings are comparable to the works of figural expressionist painters from San Francisco such as Elmer Bischoff and David Park. The figures’ comfortable body language strikes a positive chord that contrasts with their morose self-possession. When more than one figure appears, each remains isolated, physically and psychologically. Despite their pleasing qualities of form and color, the paintings seem to express anguish, revealing a disconcerting duality.
In August and September of 1966 Brice made two color lithographs at Tamarind that capture the imagery and mystery of his fauvist landscapes. In comparison to his expressive lithographs of 1962, they seem quiet and static; their mood, however, is similar in its somber introspection. Like the best of Brice’s earlier Tamarind prints, these lithographs are quite sophisticated in their technique. Despite carefully modeled forms, conspicuous strokes of crayon and brush reflect the process of their making. In the earlier of the two (see fig. 8), the artist treated the printing surface with many different effects, ranging from passages of bright, solid color, to softly modeled clouds of tone. Flat, bold forms again reveal the influence of Matisse, particularly the Jazz suite of pochoir prints, which are essentially reproductions of the artist’s vivid paper cutouts.
A gradual but fundamental change soon came to Brice’s imagery. In his drawings and paintings made in Los Angeles in 1968, and in the work produced during a six-month sabbatical in London in 1969, evocative references to ancient Greece appeared. In his drawings, canvases, and a series of oil paintings on gritty emery cloth, Brice placed fragments of classical architecture and figurative sculpture alongside jagged breccias and smooth river boulders. In 1970 the artist visited Greece with his family, touring the archaeological sites of Athens and cruising around the Cyclades. Brice was delighted and visually enchanted by the bold beauty of rocky islands and endless sea, all imbued with a crystalline keenness by the thin, clear atmosphere. At that time the fragmented, visibly eroding ruins of antiquity still lay haphazardly on the ground, evocative splinters of classical civilization. Brice took many photographs of landscape vistas and of the shards of ashlar masonry, fluted columns, molded entablatures, and carved capitals, all jumbled together on the ground. He was aesthetically reenergized and redirected. In his own work he had long been seeking to compare the individual’s experience of life, both perceptual and emotional, with the grand scope of universal human experience. He now realized that this notion could be symbolized by reference to classical civilization.
The artist drew fervently while in the Mediterranean and after his return to Los Angeles. The earliest of these drawings and paintings represent rocky forms that suggest the components of classical architecture and fragments of sculpted figures (see fig. 9). These weathered shards make thought-provoking allusions to the passage of time and the demise of the great civilizations. Their comparative scale and illusionistic perspective imply that they are set in indistinct envelopes of space. Carefully modeled and shaded, these forms project a weight and illusionistic solidity that had been absent from Brice’s work since the early 1950s. He concentrated on the space between objects, exactingly balancing and energizing the voids and making the forms physically interdependent.
Brice continued to develop the imagery for both paintings and prints in his intensive drawing, which was, and remains, his point of departure. To capture inspiration and refine his ideas, he made sketches in series, repeating, reworking, and gradually shifting and varying motifs. The drawings progressively became smaller, quicker, and more numerous. “I want to act upon any idea or image that passes through my mind ,” Brice explains. “I want to grasp it, to mark it. I also find that one drawing begets another, and the idea develops.” He made sketches by the dozen, saving and expanding those that seemed intriguing and discarding those that proved dissatisfying. By refining several of his most charged motifs, the artist developed a vocabulary of primal symbols, embodying male and female, bestial and vegetal elements, as well as ideographs for earth, sky, and water.
Whether they were quick jottings of germinal ideas or relatively finished preparatory models, the artist called these sketches Notations. Executed in pencil, ballpoint pen, wax crayon, or felt-tip marker, they were drawn on four-by-six-inch file cards or scraps of inexpensive paper cut to exactly the same size. The scale of these sketch sheets allowed Brice to work almost anywhere with minimal preparation, when he found a spare moment or when inspiration came to him. He found that using modest materials such as inexpensive typing paper and ballpoint or felt-tip pen allowed him to experiment freely and concentrate on his emergent imagery.
The spontaneous, meditative nature of Brice’s preferred working method, in which ideas come quickly and are refined through repetition, bears an interesting relationship to the demands of printmaking. In one sense this process is corollary to the long, involved methods of presswork, which allow the artist to change and refine his imagery and afford a record of this development in the proof impressions of progressive states.