The Artist, like everyone else, sets out to master some sort of reality, and a different idea of reality means a different style. And now, when everything co-exists, there are guardians of different realities. There are, for instance, at least two kinds of drawing or at least two impulses guiding a hand. One describes the great satisfaction of making a drawing, the following of a form that fits something outside. And here there is usually the hidden pleasure of mastering reality in scientific terms. It might be called Renaissance drawing, although of course it is both older and younger than that. But the getting of everything in its three-dimensional place, with the eye at the apex of the pyramid, is an enormous intoxication. 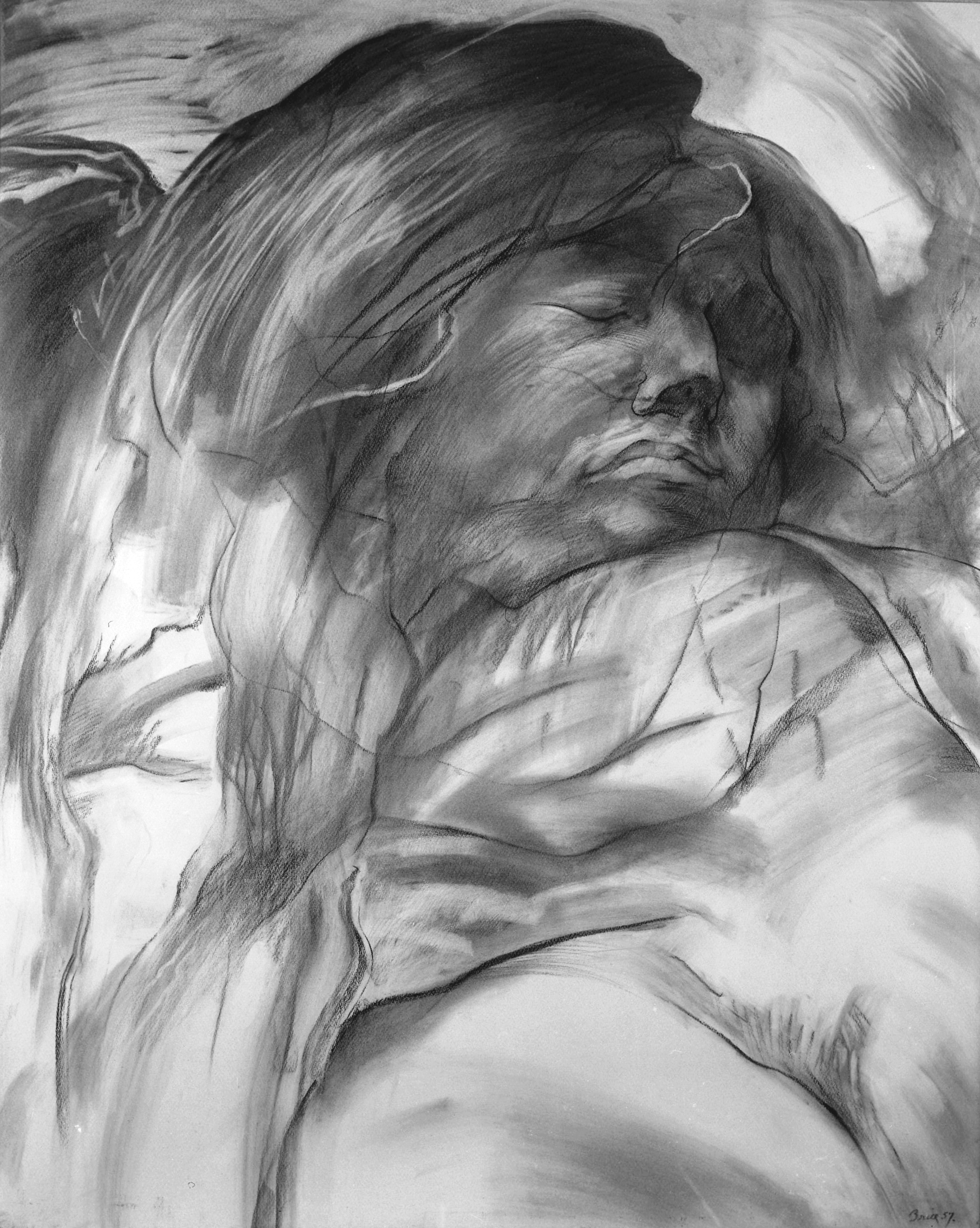 Then there is the far older direct attack on reality, perhaps the oldest of all, through magic. Here it was the form that resembled or described, but the content was power, and this mysterious power was the end in view. Our modern self-consciousness has brought this drawing back to us. In this drawing of an image, with its shape, gesture or action, and implied relation to ourselves, the outline is vital. For this is the all important division between what is judged to be alive and what is not. And from the beginning a surprising number of objects were also invested with life: man animated what he touched.

Having made this distinction, one must admit that it is often blurred. No objective image is unloaded; no vehicle that pulls an emotional load but symbolizes something, however abstractly. On the other hand this distinction between kinds of drawing is never quite lost, for we at once sense the difference in intent. Some artists are grasping for fact. They define and explain, struggling from innocence toward intelligence, which is perhaps the way we are all going. But others are lovers, and are abashed by intelligence and struggle toward innocence.

The word magic having grown vulgar, let us say the figures in Brice’s drawings are partially hypnotized, and this has robbed them of certain powers of their own and placed them under other powers. The feelings which fill them are vastly simplified, and this is really the source of the deep unity of the compositions which center upon them. But if they are deeply filled with emotion, this is not a prompting to action. For something has already happened which preoccupies them, a something that they must relate to their actual circumstances. This is why they must be given an environment; and why it must be an environment that has little explanation; and why it is often a series of fragments.

Many of Brice’s drawings suggest theatre, not only in the subtle, exaggerated gesture but in the harmonious relation between the figure and the environment Brice provides for it. But this must be qualified: a Brice drawing is drama of an inward sort, because the action is not up ahead. The action has taken place or the revelation has occurred, or the act of love has already happened and disturbingly left no trace. So the drawing is elegiac. The naked women in woods are not subject to the shrill fear of woods. They brood over their condition.

One may well ask how this is achieved. In the first place, Brice comprehends a drawing as a screen part way between the artist’s own inner reality and the world outside. The drawing is only semi-transparent and must be taken as a partial account. We only see, we are only permitted to see, by selection. In short, we see as an animal sees with its twin impulses of safety and desire. It is the virtue of this drawing that simplification is essential. Such a simplification is often achieved by making a drawing from a drawing, and by this method distortion enters without being invited. (The goal is to distinguish between what is alive and what is not, and to this end Brice uses line to establish the perimeter of bodies, the single most important division or edge in the world for us—unless we are in love.) So, for Brice, drawings can be made from drawings, can be simplified, and can hardly fail to be exaggerated, consciously or not. The literal can be filtered out, the emotion can be filtered in.

Then there is the problem of size. Most of the figures are far less than life, so they are held at a distance. Their nakedness is not immediate, nor does it presuppose ours. These little figures cannot communicate with us as people. Yet, strangely, it is their puppet quality which excites, because they owe their animation to the artist, and, by implication, to ourselves. They have ceased to be models and have become subjects. The opposite effect, in scale, is the larger-than-life. If smallness is distance, and life size is one-to-one contact, larger than life takes us inside. This is a trance experience, and the large Brice figures are entranced, and entrance the beholder.

There is great variation from faint edge to hard outline. Some of the figures are evanescent, and float into their environment. Others have a boundary that is drastically emphasized. This sounds as though Brice were making a distinction between personalities, but it is much more how the artist felt about being, existing, at a given time.

It is obvious in these drawings that the environment is made for the figure or out of the figure—to drop back to the resemblance to theatre which we have halfway repudiated, the environment is a set, and the objects, rock or tree, or building or window, are properties. They are things on which one can hypnotically focus, and this is a bond between the figure in the drawing and ourselves. For these objects around the figure loom up preternaturally: if they are fragments, they interlock with other adjacent fragments. They are in orbit with each other; they are part of a field of force. In short, the artist’s method is to create an environment out of fragments—note that this does not fragment the composition: each unit is in orbit with respect to every other. There used to be an anatomical fragmentation in Brice, a certain warping or disabling, with isolated limbs as objects of attention, but this has gradually disappeared. The limbs are not hung on the figure. They are the diagrammatic language of the figure, which perhaps is another way of saying that Brice draws well.

These figures do nothing then? Yes, they are employed: their postures are their occupation and their language. They possess gesture. Gesture is single, and unifying as an act. There cannot be multiple gestures all at once. The gesture of these figures describes the feeling that fills them. In fact, the feeling seems to be concentrated in one limb or one hand or one leg—the weight, the life, is never equally divided between two. There is often a sweep of enlarged molten arm up into shoulder and trunk and on into neck.

It should be remembered that Brice, the painter, moved from his early abstracted images in an overall pattern to large abstract landscapes—tawney, rock and dead branch forms such as are found snarled, dry as bone, in parched California water courses; he also painted vast blue scenes of mountain or perhaps sea, unfocused paintings laced together by their own structures. The figures therefore are somewhat late in the evolution of Brice’s work.

It is time to go from drawing to drawing to consider their range. Take four portraits, the first, Man at Table (1955). A welter of contradictions creates the belief that the man exists. The cafe or restaurant-size table, the arm hooked over the back of the chair, say conviviality, but the face confronts no person, at most ideas or realizations, and with desperation. This is an indifferent gourmet: the plate with indeterminate food plus knife, fork and spoon, provides a second center for the figure, a genital area if one looks through the table—food is love. But again, this is a matter of puzzlement, for the right arm, that expands for its work, fades out of sight.

Man with a Cap (1956) presents a total facade on which hands and face float like stucco flourishes of naturalism: it is the indication of wide shouldered suit, the pair of loud speakers out in front, that project the personality. Another, Profile of a Woman (1955), is a troubled portrait with hair strained back, in fact with every dimension strained yet subtly justified: a perfect alert ear is strained back too, away from a suspicious eye, yet not too far back for the depth of head which in turn is not too deep for the height of forehead. All is brittle, including the arabesque of clothes, and the environment is pure black nowhere, which shuts the personality in its own elegant luminous crystal; and then a third, Portrait of a Woman (1956), is a thoughtful, intelligent face in its own shade. All these are really monochrome paintings.