If there is such a thing as an “artist’s artist,” William Brice is one such. When that description is invoked, it usually connotes an artist dedicated, perhaps against the odds or against fashionability—and often hazarding the risk of career impediments—to a highly individual aesthetic, yet realizing that aesthetic with virtuosic finesse and aplomb, all the while earning and enjoying the earnest admiration of other artists, who may be the subject’s primary audience. There is a faintly wistful notion of going it alone—admirably so—embedded in the term’s usage, as if being an “artist’s artist” were notionally inflected with a spirit of self-sacrifice, as of one having given up something desirable—fame, perhaps, and commensurate fortune—in the noble pursuit of a singular inspiration. If there is a nearly ineffable tinge of melancholy about the term, it nonetheless remains a title conferred by peers with the utmost respect and regard.

Who was this inspired artist who, for whatever reasons, went it alone? The literature surrounding Brice’s achievement is oddly scant on his personal history. (The biographical timeline included in this catalogue, compiled by the artist’s son, John Brice, and Bonnie Earls-Solari, should serve to flesh out the record.) The basics are well known, and are outlined by Richard Armstrong in his 1986 catalogue essay for the exhibition William Brice: A Selection of Painting and Drawing, 1947-1986 presented by the Museum of Contemporary Art, Los Angeles. William Brice was born in New York in 1921, the son of Broadway, radio and film star, Fanny Brice, and Jules “Nicky” Arnstein, whose relationship was the inspiration for the heavily fictionalized Broadway musical Funny Girl and its film adaptation (both produced by Fanny Brice’s son-in-law, and William Brice’s brother-in-law, Ray Stark).

He grew up in various well-appointed homes on Manhattan’s Upper East Side, and enjoyed the privileges of a wealthy household: a lustrous social life with frequent visits by luminaries from the theater and music worlds specifically, and the arts in general; governesses and private tutors; a summer home, vacations, travel. Young Brice showed a precocious interest in art, and was strongly encouraged by his mother to pursue that interest; she retained painter Henry Botkin to foster the boy’s artistic inclinations. She also supported his interest in other artists; at age 14, the lad acquired a 1906 drawing by Picasso, the first of numerous works he would collect by other artists over the years. Later, in 1938, when the Brices moved to Los Angeles so that Fanny Brice could pursue her radio and film career, William was enrolled in the Cumnock School for Expression. In 1940, he traveled back to New York briefly to take classes at the Art Students League, returning later that year to Los Angeles, and attending Chouinard Art Institute, then the city’s premier art school, in 1942.

But the family’s privileged circumstance was not without troubles during young Brice’s formative years. As his son John has commented, “He was born with a silver spoon rammed down his throat.”1 The governesses who attended to him, and his tutor Henry Botkin, largely served as parental figures or surrogates, during his youth. As a hugely popular stage and radio personality, his mother was rarely “between projects,” and toured frequently in shows across the country, sometimes being away from home for weeks at a time. When she was in New York, she usually worked nights, socialized afterward, and often did not return home until very late at night. As John Brice observed about his father’s home life as a boy, “Even when Fanny was around, she wasn’t around, and I think he missed her presence.” Moreover, life with his father was less than satisfying. “Nick Arnstein,” John reported of the grandfather he never really knew, “was an immensely stylish man who did not believe in gainful employment to support the finesse of his lifestyle.” He was a gambler who had ties to the so-called “Jewish mafia,” and was prone to shady dealings. In one of the most notorious financial scandals of the era, in 1924, Arnstein was convicted of securities fraud and sentenced to three years in federal prison. He was not at all close to young Bill and his sister Frances to begin with, and then he was incarcerated. Fanny Brice divorced him soon after his release from prison, and he had little regular contact with the family thereafter. John Brice surmises that the absence of a father “left Bill a haunted man throughout his life.”

As for William Brice, John says that while his father was frank about his family life and background, he mostly kept his more haunted thoughts to himself and his therapist. John describes his father’s life as “compartmentalized”: on the one hand, he would often enjoy a great bonhomie among his many friends (who continue to speak avidly about his sophistication, social graces and deep generosity) and celebrate life with a robust sense of abandon; yet he rarely opened up about whatever heartache he harbored, remaining private before friends and family, and forever silent about his inner self.

Except for his ideas about art. On that count, John Brice describes his father as an “art priest,” passionately devoted to its ideals. In a typewritten manuscript of lecture notes, William Brice, sounding priestly indeed, wrote, “The legacy of art is a record of man’s experience; a vision of his mind and soul; his appetites, aspirations, fears, dreams, delights and beliefs. In the light of this an essential value of painting is that of revelation. Appreciation of art demands recognition of its revelatory nature.”2 Brice lectured frequently on the nature of art, both as a public speaker at many museums and as a teacher in the studio art program at University of California, Los Angeles, where he was on the faculty from 1953 until he retired in 1991. He was, and remains, a fabled teacher. Perhaps his idealism about art and its wellsprings was never more abundant than with his students: Brice began the first class of each semester by announcing to his assembled students, “I am not your teacher.” After a silent moment before his perplexed charges, he clarified: “You are your teacher,” explaining that he saw his responsibility as guiding and nurturing them in their individual quests, each for their own artistic flourishing. Revelation, he counseled, begins internally with each person, and it is the true artist’s mission, or calling, to communicate one’s deepest insights, feelings and intuitions with the world through the nearly mystic associative powers of art.

Brice’s own innermost feelings, expressed through obscure narratives, or non-narratives, comprise an introspective, often melancholy, oeuvre. Among his earliest post-student works from the mid- and late 1940s are a group of striking series of Rock Compositions —still-lifes— of small rocks and stones depicted as highly formalized arrangements on a floor or a table against a wall. These painted stones, though inspired by real stones that washed ashore and were collected by Brice on walks along the Pacific coast, are all well worn by time, and smoothed into irrefutably biomorphic shapes that almost resemble human torsos or other body parts—bones, internal organs, male and female erogenous zones. The grouped stones variously touch and overlap, caressing one another, reclining one atop another, or resting in partial isolation from the others. It is as if they are not merely occupying space and volume, but are behaving. It is virtually impossible to look at these depictions without reading them, even if at some subliminal level, as being about entities in relationship—not merely a formal relationship—to one another. These “scenes” have a peculiar, palpable intensity—a theatricality, really—as if they were silent psychodramas in which the stones are acting out some murky roles. Which is to say that Brice imbues these still-lifes with a tacit anthropomorphism, prompting the viewer to perceive them as an allegory of human relationships, both physical and psychological. These exquisite arrangements are further aestheticized by an odd, milky white light that suffuses the space and makes them seem suspended in time, much as with the meditative quietude of a still-life by Giorgio Morandi or the near metaphysical stillness of a Zurbarán still-life. Uncanny as it might seem to vest objects as lifeless as stones with a sense of inner psychological drama, Brice attempts and succeeds at doing so in these works that, in retrospect, presage important attributes of his “totemic” works decades later. 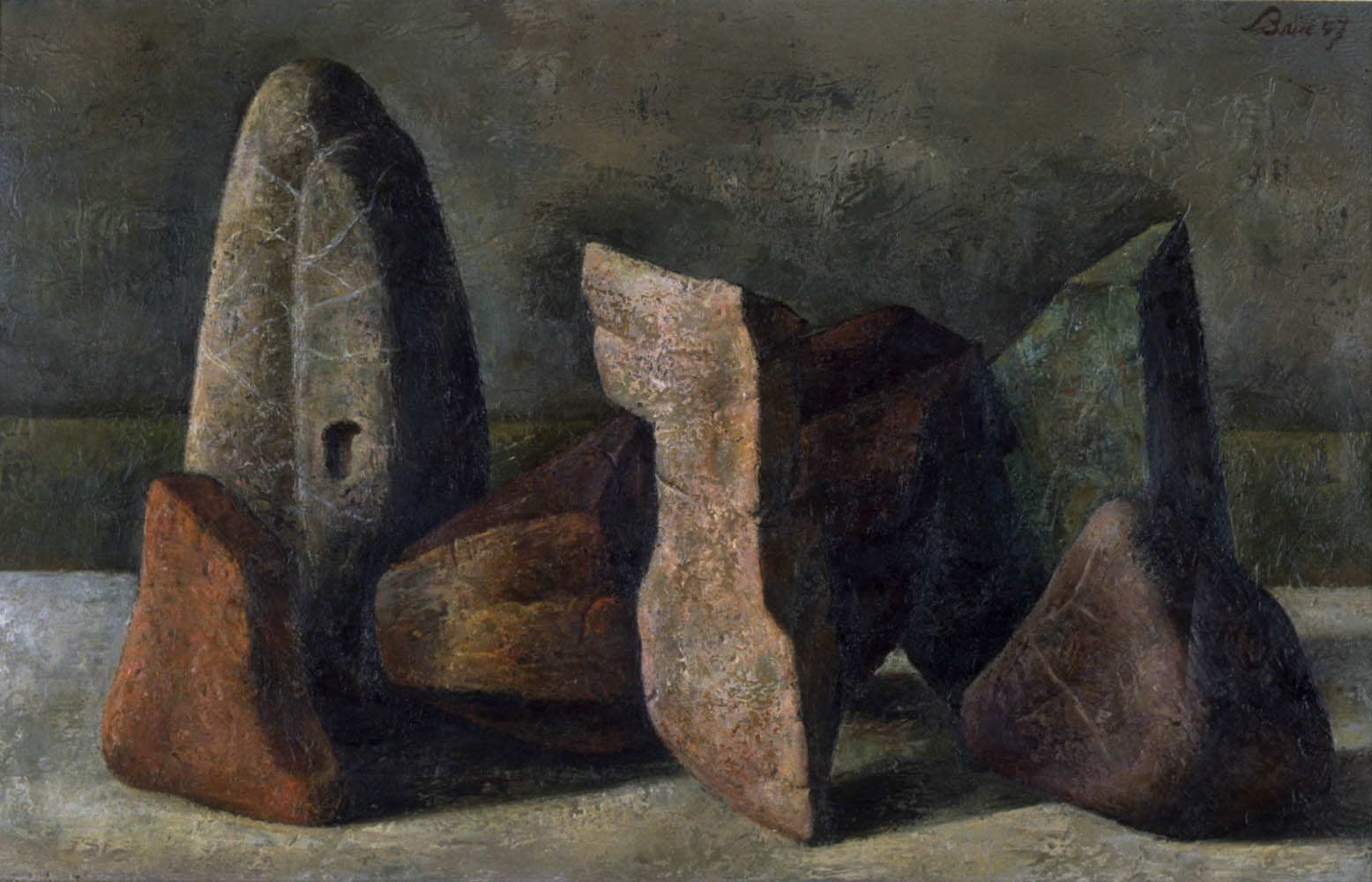