“Drawing is a continuous activity for me. Increasingly I feel that I want to act upon any idea or image that passes through my mind. I want to grasp it, to mark it. I also find that one drawing begets another, and the idea develops. I rarely use a drawing as a direct study for a painting. The drawings have a life of their own. They establish a vocabulary that I develop in painting. So the drawings and the paintings coexist”

(from an interview with William Brice by Wendy Diamond
and Constance Lewallen in View 4, no. 6 [Spring 1988]: 2)

William Brice’s terse and cogent observations on the relationship between drawing and his work as a painter are essential to an understanding of forty-eight sheets drawn in 1982, which he has grouped together and titled Notations. These works were made on four-by-six-inch file cards, a small format the artist could keep readily at hand to record ideas when he was away from the materials normally available in his studio. The casual and impromptu circumstances under which the drawings were done are reflected in the artist’s choice of media—pencil and color crayons, which can be used immediately without the sometimes cumbersome preparations that ink and watercolor require. Although the artist accepted certain restraints of format and media, the expressive potential within these confines yielded a rich trove of imagery containing reflections of past work and auguries of future projects.

“If you ask me what I work toward, I would answer synthesis. Some of the most memorable works for me are those that call to a composite of our responses—mental, emotional, physical, psychological.”

Frequently the compositions of Brice’s drawings or paintings are dominated by two somewhat abstract forms that find a harmonious resolution within the confines of the artist’s paper or canvas. Male/female, figure/landscape, human/vegetal, and illusion/abstraction are some of the pairings that have occurred in Brice’s work. One of the most richly worked Notations, for example, shows on the left a squarish form containing a series of lines, unfurling petallike from the center; this configuration is supported by a pair of half-round shapes (fig. 1). Opposite is a totemic figure whose maleness becomes more evident if one looks back to a series of paintings from 1974-76 that have clearly sexual references.* The same theme surfaces again in 1978, where the male/female duality is treated even more abstractly—a closer parallel to the Notations figure. Brice’s male icon, separated from the left part of the Notations drawing, with its female associations, resurfaces in all essentials in a 1984 oil. These affinities among works support the artist’s assertion that he establishes a “vocabulary” in his drawings that is inevitably reflected from time to time in his paintings.

“If I found very few drawings that I made directly from a model satisfying, it simply meant that I had not come to realize what was most significant to me. It’s only by reworking or making subsequent drawings that I found a motif in the figure” 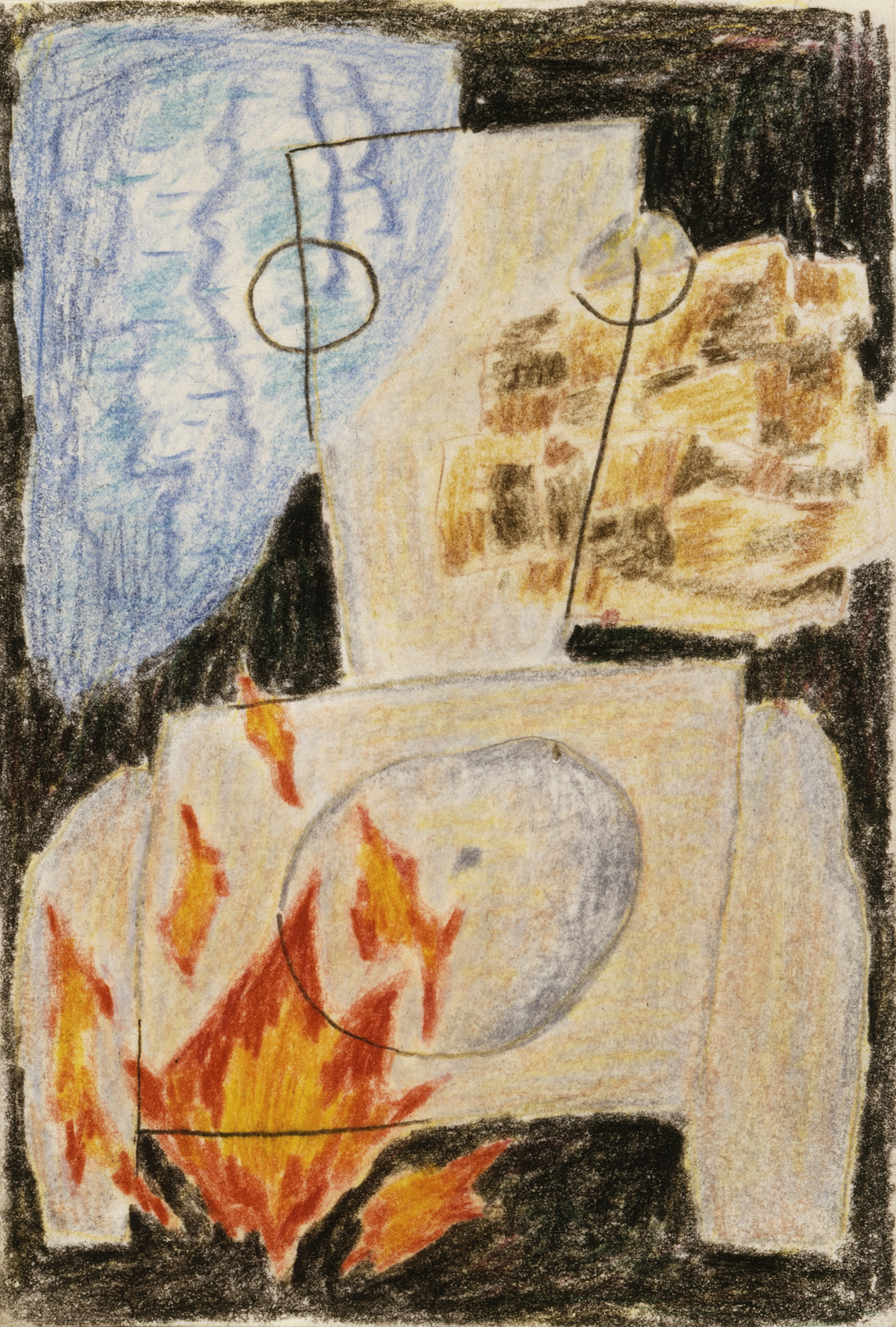 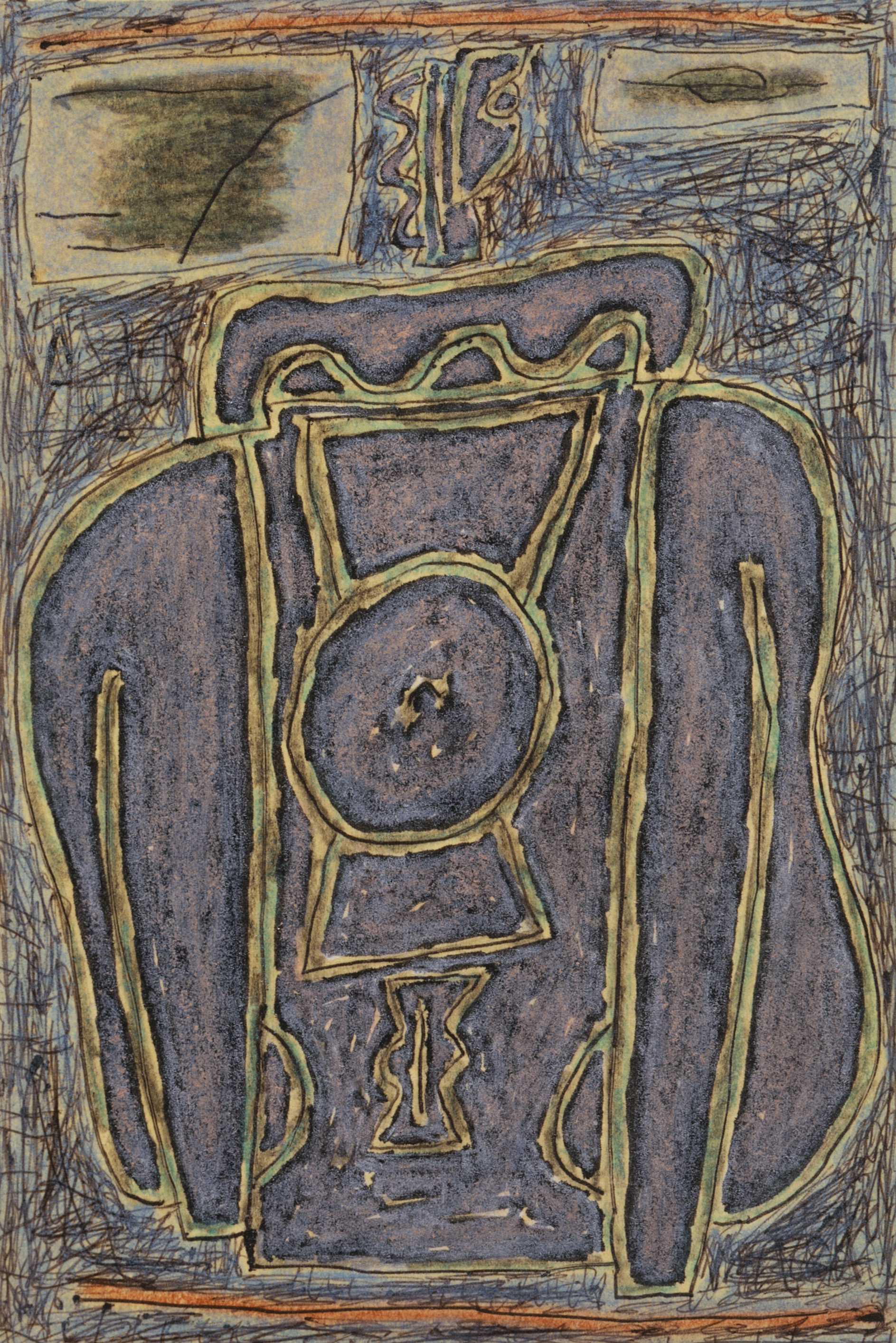 One of the less-abstract Notations drawings at first glance appears to be little more than a few yellow-orange leaves scattered across a ground of blocky, abstract shapes (fig. 2). For the viewer familiar with Brice’s earlier paintings, the stone-colored areas recall the figure of a crouching woman in a 1978 canvas, even in the juxtaposition of the upper part of the figure with an area of blue, perhaps sky or water. The totem figure’s lower body, its round belly sturdily supported by the haunches in a crouching pose, is developed more abstractly in another Notations page (fig. 3). Each element of the subject is clearly bounded by heavy outlines that both define the various parts and interact like the elements of an architectonic construction where every part is positioned to support the whole. This small but imposing figure is set against a shimmering background created by scoring through several layers of color crayon so that threads of largely hidden color rise to the surface.

One of his most affecting references to the human form is a tangled skein of lines placed against an amoebalike ground (fig. 4). A fairly literal rendition of an opened flower in the upper-right corner challenges the viewer to identify the more abstract shapes with a similarly concrete reference. If one returns to the first Notations drawing mentioned here (fig. 1), the blocky floral shape supported by two full half-circles (breasts?) gives one a clue to the associative language used by the artist. These remarks suggest some of the relationship that can be found among the Notations drawings and their place within the larger field of Brice’s work. But reading them so literally risks losing sight of their casual, improvisational qualities. Each sheet was created as the need arose to record an idea, without a program or sequence to unite the various drawings. Color relationships, textures, qualities of line or shape also can suggest to the viewer qualities associated with objects or, equally, certain states of being that will vary depending on the spectator’s background and receptivity. For Brice these are equally important factors in the realization of his works, at least on a par with the specific identities of his images. 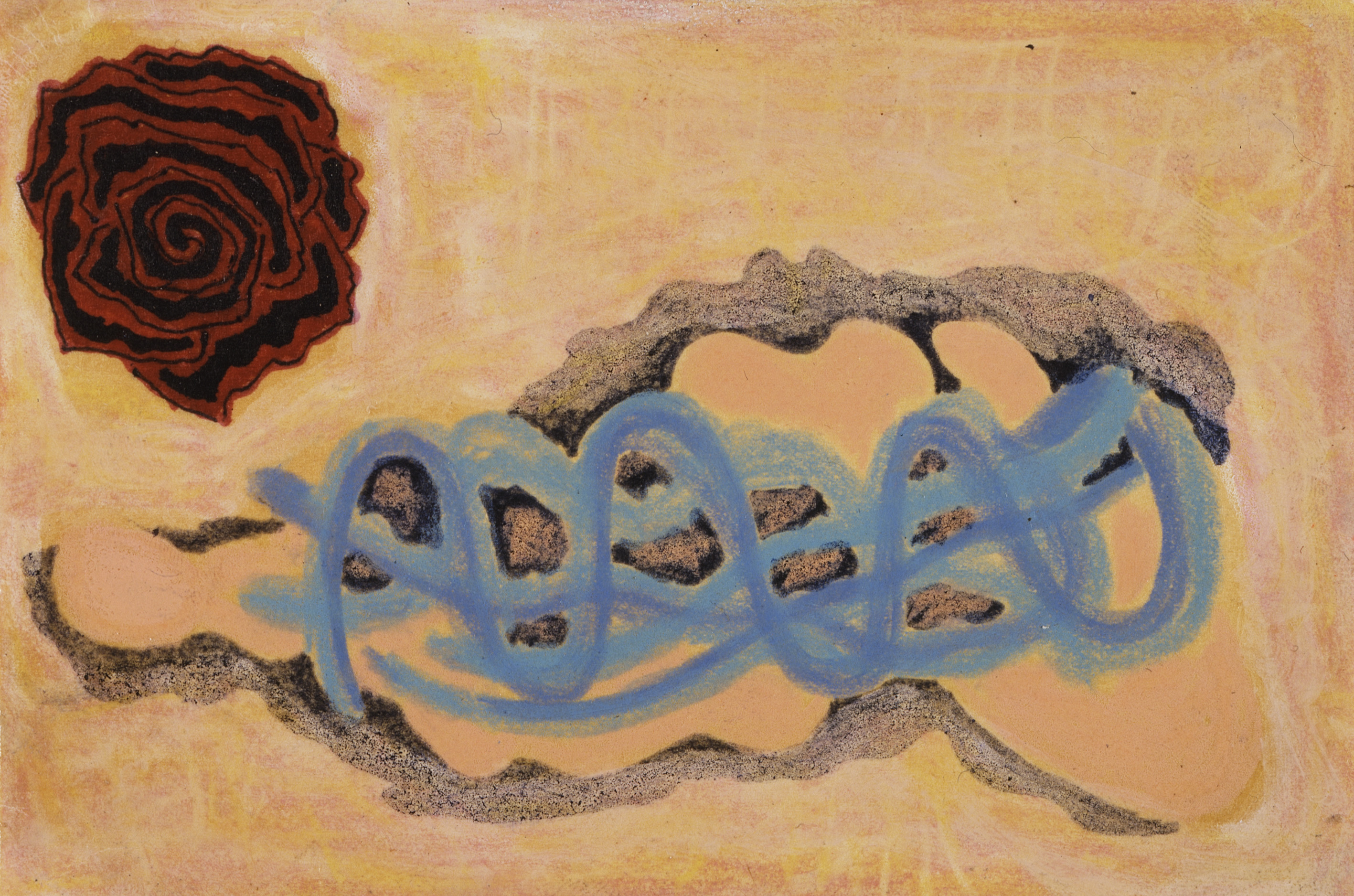