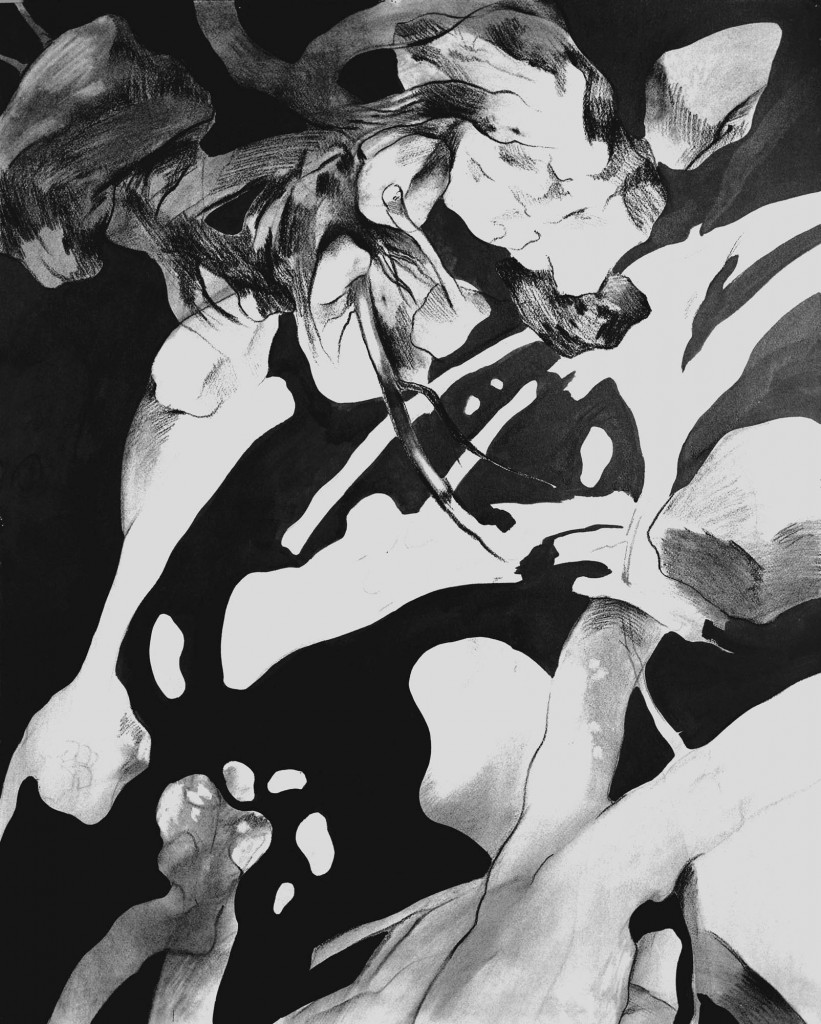 A related asocialness dampens the glowing twilight palette of Interior IV, 1963-64 (plate 9). Long, horizontal washes of greyed green and blue define a wall and floor. Again, two windows, one at each end of the wall, give onto the outside. A light blue worktable tilts forward near the center of the room, confounding its illusionist space. The upper portion of a chair anchors the painting’s lower right. Beneath the right window, a figure rests on a green cot, lying stiffly atop an orange blanket. Its short hair, long torso, and featureless face suggest androgyny. But more importantly, the levitated body and absent eyes make manifest Brice’s move away from an objective vision toward an internalized one. Again, there is the paradox of a softly lit room that seems to foster feelings of isolation. Even in the rare drawing of the period that feature two people, such as Two Figures in a Room, 1964 (plate 32), Brice places them in tragical poses. Assuming the exaggerated, almost mannerist elongation that marks many of Brice’s drawn and nearly all his painted figures, they sit with their backs to one another beneath a Neutra-esque clerestory that suggests the drawing’s autobiographical nature. Brice’s repeated return to live models for his figure drawings was motivated by his desire to capture a telling pose or gesture. Many of the drawings are done from the memory of certain models—composites or reconstructions altered by time and selective recollection. He has explained this practice:

If I found very few drawings that I had made directly from the model satisfying, it simply meant that I had not come to realize what was most significant to me. It’s only by reworking or making subsequent drawings that I found a motif in the figure. . . .
The majority of the 1960s drawings are of females, many of them individuated. Figures are rendered in a repertoire of movements and poses: seated, kneeling, lying down, or walking. Until 1964, rooms are the predominant location for Brice’s figures; after 1964, landscapes become the most common locale. The rugged Mulholland terrain of the mid-1950s paintings gave way to gentler locales laced with streams, sinuous paths, and soaring tree trunks. Brice unknots the dense tangle of the earlier landscapes, refining their allusive transfers of significance. The slender, vertical tree trunks (derived from the small grove of citron eucalyptus (figure 7) that graces the area between Brice’s studio and house) often seem mute onlookers, cylinders of color; but other elements—stumps, rocks, vines—take on anatomical implications. 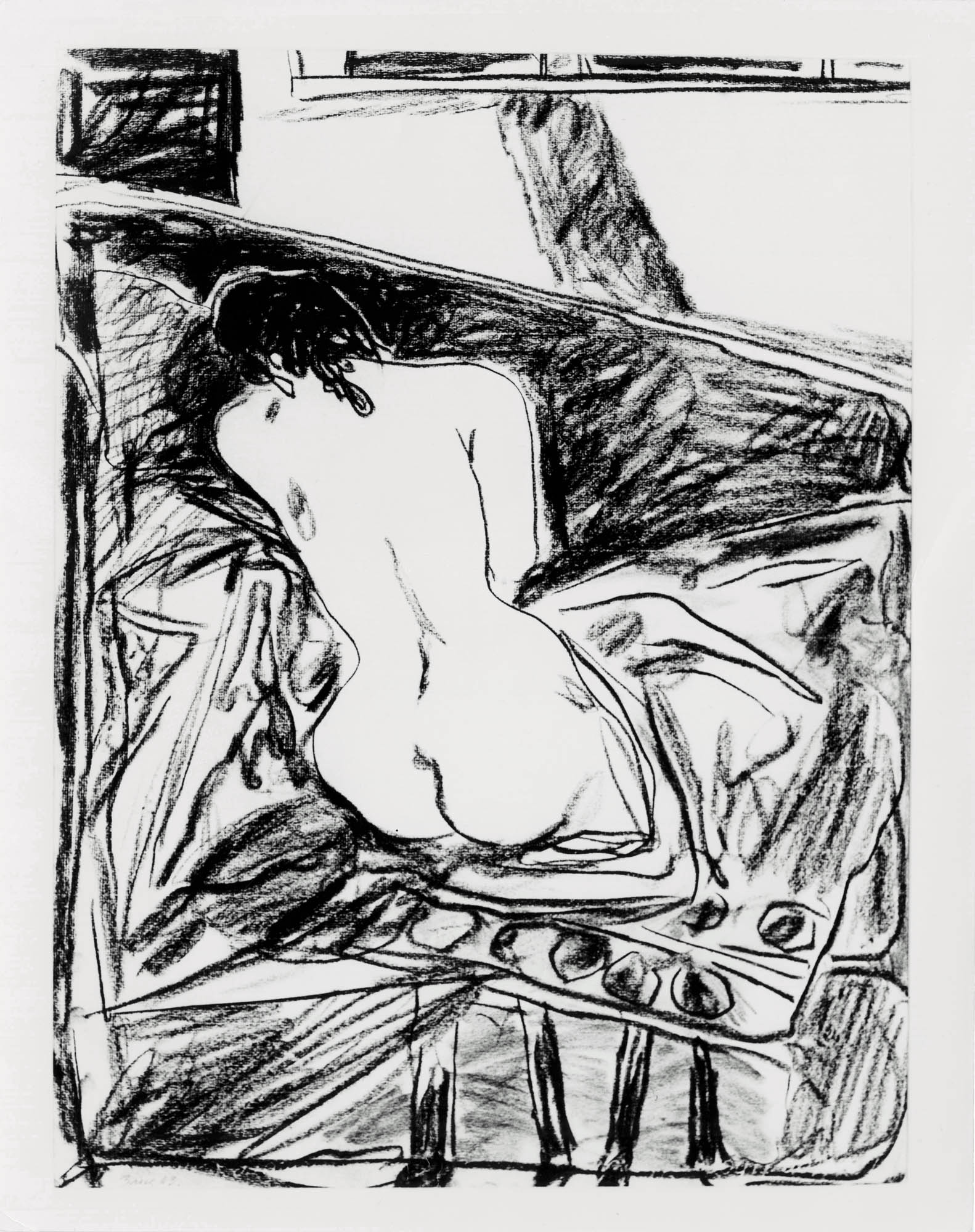 Several of the figure-in-landscape paintings that accompany the drawings are sheet-sized (about 24 by 20 inches) almost as if Brice wanted to making painted drawings. Unlike the Interiors, these smaller paintings are about nuanced form, complex composition, and high, sherbetlike color. Brice’s reliance on red-based tones continues and is accentuated by a newly adopted array of optically contrasting blues and greens. Brilliant arcadias, these scenes nonetheless recall the isolation and melancholia of certain of the Interiors. First impressions of Figure and Blue Tree, 1965 (plate 10), for example, respond to the dazzling green field that locates the image. However, the seated figure is seen from behind, slightly hunched; a watery curve, a path or stream, moves towards a setting sun on the horizon; a stubby, purple tree trunk cuts into the foreground. The picture, fully considered, has a mysteriously pained, almost mournful air.


As the paintings expand in scale, becoming seven and eight feet tall, they become more open, even optimistic. In Seated Figure in a Landscape, 1965-66 (plate 13), the contrasting red and green lend the painting a greater balance that benefits its composition. A female nude is seated in the landscape; short-cropped, brunette hair frames her otherwise featureless head. Her arms support her from behind; her legs are open, one fully extended, the other bent at the knee. The pose is common to a number of Brice’s drawings, but with the figure’s triangle of pubic hair and ample breasts, it is a frank display of sexuality unusual in one of his paintings. A sizeable pink tree trunk next to the woman carries a searing red gash: the correspondence between female genitalia and scarred trees suggested in some of the smaller landscapes is here fully elaborated. The piece exudes a charged languor that, although previously found in his drawings, is new to Brice’s painting. A swooping path, its curves echoed in the shore line of a mauve colored pool and in the undulating horizon, recedes toward the upper right. The landscape seems to cup the figure, rolling away from her in a charged motion. Brice’s invented terrain resonates with the flesh of the body. This is the fullest expression to date of the spiritual fusion with landscape Brice had experienced ten years earlier.

Two Figures, 1965-66 (plate 14), is a final and monumental reconciliation of female and male. In it, a woman walks along a meandering orange path towards a nude man seated on a rock in the midst of a green river. An oversized blue tree animated by a palpitating violet shadow symbolizes the tension between the figures and divides the canvas into separate male and female sections. Over the man hangs a scalding, bright yellow sun with a red aura. He casts a shadow on the watery green surface. The female side is darker: with the downcast mien of the woman and a sketchily painted black bush, it seems altogether more inward-looking. An orange-red, vaginal cut in a blue tree behind the woman echoes her pubis. With this painting, Brice fully elaborates many of the symbolic oppositions that become the hallmark of his later work. It is, however, the apogee of his figurative paintings. Consciously or not, over the next few years, he begins to return to a more abstract and ambiguous subject matter.

A change to a different style was facilitated in 1968 by Brice’s move, with his family, to a studio in London for a six-month sabbatical from U.C.L.A. After teaching steadily for more than twenty years, he had come to know many of the younger generation of southern California artists. He continued to enjoy being around students, their odd combination of naive inquisitiveness and skepticism suiting Brice’s own maverick aesthetic. He also kept in touch with many former students, including Tony Berlant, Vija Celmins, Charles Garabedian, Craig Kauffman, and Ed Moses. The Los Angeles art scene had grown enormously during the 1960s. Richard Diebenkorn, who had over the previous nine years become Brice’s closest friend, moved to Santa Monica from San Francisco in 1966. 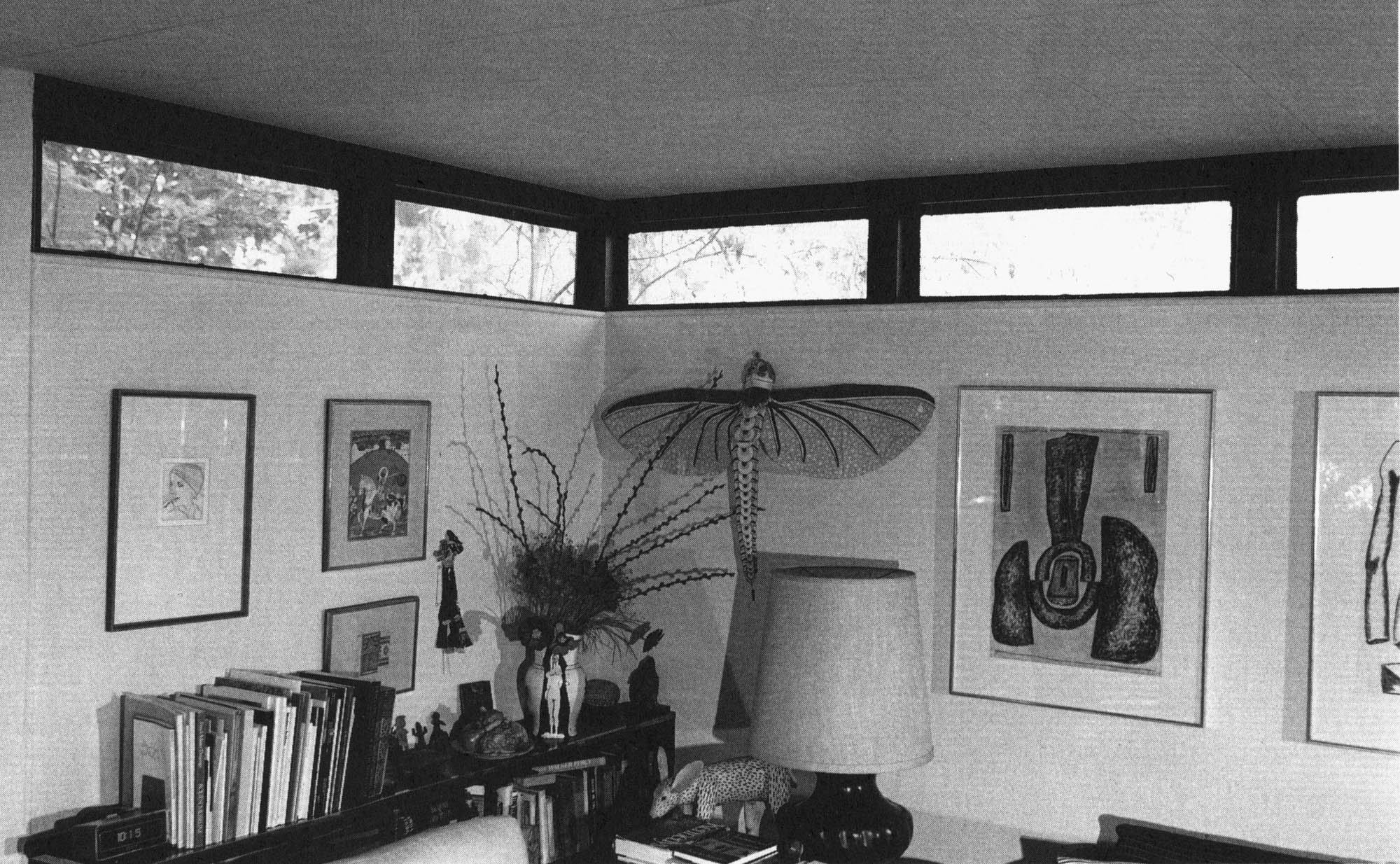 figure 6. Interior view of the Brice home, designed by Richard Neutra in 1936

Ferus Gallery and the Pasadena Museum of Art were at the forefront of a new avant-garde. From 1964 to 1967, the offices of Artforum magazine were located in the city. A milieu populated by divergent artists, from John Altoon and Ed Kienholz to Robert Irwin and Larry Bell, enlivened the town as never before. All the same, Brice’s preoccupation with the figure was distinctively out of step with the times. Around him were Los Angeles variants of pop art, realism, figurative expressionism, and even an exotic minimalism; but his work was kin to none of them. London provided a neutral site for Brice’s search for new forms. He renewed his acquaintance with David Hockney, and with the American expatriate painter, Ron Kitaj, who had been a visiting professor at U.C.L.A. Little of his London work remains, but in paintings done there, Brice returned to fragments—this time to classical ruins—as a way out. These paintings were continued back in Los Angeles, where he moved into a new and larger studio in Santa Monica.