2 of 6
WD: You went to something a little more…I don’t want to use the word symbolic because symbolic has a very defined meaning; I think you called it “associative”.

WB: Yes, but when we talked in Oakland I was saying that in retrospect I see I’ve never had an inclination towards descriptive illusionism, per se, toward the literal recording of perceptual appearances. Nor have I ever been a nonobjective painter. Although a nonobjective painting, which is akin to much in music in not being specifically referential, has the possibility of association in it by means of qualities of surface and color, by mode of execution, by the experience of the painting of the work. It is the transformative that I find most compelling.

WD: When you say “associative”, do you hope it evokes in the viewer your same experience? 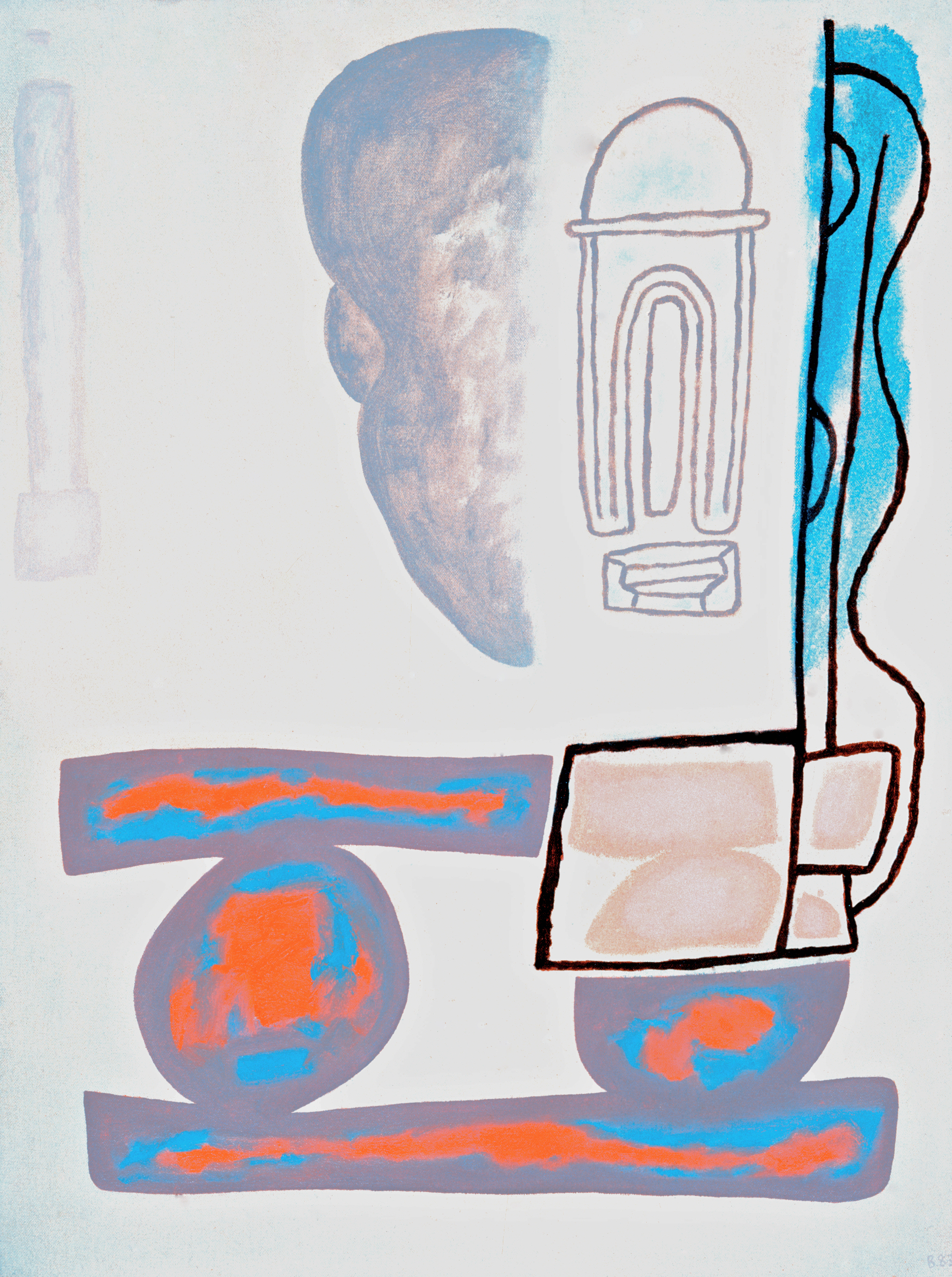 WB: One never knows what the viewer will experience, and one wouldn’t expect it to be the same experience as one’s own. Particularly in the context of association, there’s an enormous variety of possible responses, because everyone brings to the work the context of their own experience. Obviously we do share experience and association but in different cultures iconographic associations vary.

WD: So there are culturally developed associative factors. They come as well from art. A lot of the motifs in your later work are architectural, and they evoke for me anyway, classical themes that I understand because I live in the Western world. And there is, I think, something that is universal.
WB: If that is so, it is realized through the process of painting, because I’m not essentially programmatic.
WD: What does that mean?
WB: By that I mean that I am not an artist who starts from a theoretical base.
WD: You’re not working through a problem?
WB: That’s right. Problems emerge that I need to solve, but the work is not undertaken as problem-solving.
WD: So you are not starting from a formalist point of view?
WB: No, but I’m involved with formal values and I always have been. In fact, if you ask what I work toward, I would answer synthesis. Some of the most memorable works for me are those that call to a composite of our responses—mental, emotional, physical, psychological.
WD: And in your work there are associations of the architectural and sculptural, and of personages.
WB: Tactile or sculptural values have always been in my painting. On occasion I’m asked why I haven’t literally involved myself in sculpture.
WD: And, why not?
WB: I don’t know that I won’t, but painting has absorbed me to date. The actuality of sculpture, of real dimensionality, is quite different from sculptural values related to a two-dimensional surface.
WD: It would be the thing itself? And possibly lose some of that association?
WB: Well, I don’t know that. But I do love not only what painting literally is but also what it literally is not, and it is here that the associative and the transformative power exerts itself.
WD: Then your work is somewhere between the abstract and the figurative?
WB: Concerning being in between associative and abstract values, I remember, for example, Matisse writing about Giotto and saying that he felt that even before you recognize the iconography of a Giotto, you experience the painting’s “spiritual emanation.”
WD: That goes back to what you were saying before. We share feelings and responses.
WB: Throughout literature there is the correlation between color and emotion, and we are subject to the influence of our physical environment. When we think of a large space, an uninterrupted expanse—the sky, the sea—there is an immediate spatial association. It is difficult in our minds to separate the color blue from that connotation of space. And there is the great desert floor. If you take a rectangle, and you draw a horizontal line, it’s very hard to get away from the implication of the landscape. We do not know of the great diversity of experience, how each of us is unique in that regard. Although we may each perceive red differently, we all stop at the red signal.
WD: Very often we see what we expect to see.
WB: That’s how we can understand how a work may not be accepted at a given time. It cannot be seen because people are bringing to it expectations that are not relevant to it, or the work is threatening treasured values, whatever. So, I do think that painting is one of the arts that tends to transform our view of the world.
WD: Do you think that your art might have been very different if you hadn’t been working in Los Angeles?
WB: Los Angeles, no doubt, has influenced me even more than I am aware of, even the way the light of this area has changed. In my own work I’ll suddenly think, “Oh my, that’s really close to what I experience at dusk now, this sort of sulfurous, violet, mauve, burning orange.” But some years ago that didn’t exist…I mean, when the sun went down, the sky was as clear as when the sun rose. I can’t completely disassociate from the East because I’m from New York, grew up there, and I go back often. I remember reading in Delacroix’s journal the phrase, “The Bedouin has the desert in his eye.” When I was in the Air Corps, there were a lot of pilots being trained, many of whom came from Texas, and it seemed to me that they had a different quality of gaze; maybe living in Texas had something to do with it and also flying and being a pilot had something to do with it. But, certainly, you experience place. When you come back from New York, your rate of speech and your physical movement is faster and there is the expectation of interruption. I mean, if you are hanging on a subway handle, you are crowded together, and all is close to the eye, you notice that people blink more, or seem to. There are very few times in New York when you see a calm gaze that incorporates you and goes beyond at the same time.
WD: And do you think such environmental differences affect the look of art?
WB: I think there was a recognition during the period of Abstract Expressionism of a difference between West and East Coast painting. I’m saying it rather indirectly, but New York painting reflected the energy, the congestion, the tension of the city. The paintings of the same period painted here—and I’m thinking in particular of earlier Diebenkorn paintings—were more expansive. I don’t want to say they were painted with that conscious intention, but I see reflected a different physical environment. While I’ve never been to China, when I go to a grocery store in Chinatown and see the colors and forms and arrangements of the foods, I am aware of a cultural sensibility, one that I also identify with Chinese art.