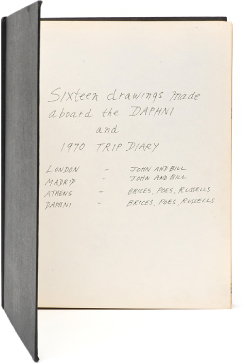 Three hours of sleep and rushed in parking and preparations. Hard pressed for time, finally hustled John [Brice] out of the house and took a cab to the airport.

Getting set on the plane for the ten-hour flight was awkward and we were pleased that a plump New Zealand wife (disgruntled because she had hoped she could sit in the window seat assigned to John) decided to change with her husband. He was a pleasant, hardy New Zealander on a tour, having spent two-and-a-half hours in Disneyland as his total time in visiting Los Angeles. The tours sounded absolutely monstrous! We talked a little and he told me much about New Zealand. Intermittently he coughed dryly, explaining that many in his group had suffered a mild case of flu. I am certain this was the origin of the cold I was to have during my days in London. Our trip was long, the plane was crowded, and because of our size, we were quite cramped. We saw a poor movie, slept fitfully, ate tasteless airplane food and waited the time to pass. Fortunately, it was a smooth trip.